How good or bad is the love compatibility between a Leo and Aquarius emotionally, mentally and sexually? Read on…

In a Leo and Aquarius love compatibility, they are bound to have an exciting partnership. There is hardly a boring moment between these two star signs. They are both full of energy and always ready for a challenge, even if that challenge means a competition between the two of them.


There is room for a lot of fun and entertainment in this Leo Aquarius relationship. But because the competitive nature there is also room for arguments as well. The Leo Aquarius compatibility may be able to work out if both of these signs put a decent amount of effort into their relationship. They need to learn to respect each other’s differences, and play on their similarities.

The Leo sun sign is an ambitious and determined sign. They set their sights high and they don’t stop working towards their goals until they finally accomplish them. This is a hardworking sign, and they will spend much of their time at work or working on an important hobby. The lion likes to be busy so that they can feel like they are getting something done. They have a hard time understanding people who procrastinate or who otherwise don’t try their best when working on a task.

The August born Leo will put their best effort into everything that they try, including trying to find a romantic partner. Leo is most attracted to people who share many of their same traits. They want to be with someone who is energetic, full of life, a hard worker, ambitious, determined, intelligent, and creative. However, they will not want to be with someone who is as independent as they are, as they will want to be “in charge” of the relationship and make the major decisions for the couple.

Aquarius personality have many of the great traits that Leo look for in a romantic partner. They are creative as well as intelligent, although they may show their intelligence in off-the-wall ways that others might not think of. Aquarians express themselves this way because they find that learning in the traditional sense is boring. They like to learn things first hand, or at least on their own time when they are not told that they have to.

An Aquarius birthday person is always on the look out for new opportunities that can let them be more creative or express their intelligence. Many Aquarius are into theatre, music, art, teaching, and small-town politics.  They don’t want to be with a boring partner, so Leo is in the clear there. They also want to be with someone just as creative and intelligent as they are, which the Lion can manage as well. Overall, the Leo Aquarius in love just want to be with someone who can excite them, whether it is for years in a marriage, or for one night in bed. 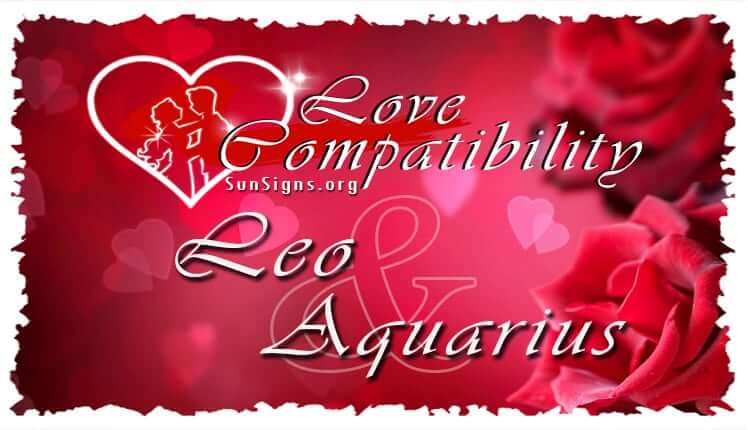 The Leo Aquarius love compatibility seems to have all the best things in common with each other. So far it seems like this is a perfect relationship. Let’s take a look at some of the pros of a Leo and  Aquarius friendship.

These two star signs are almost instantly attracted to each other when the first meet. It is almost like they can sense the creativity and intelligence in each other. It is likely that these people will meet in a public place, as they are both social signs. Leo is more likely to attract the Aquarius zodiac sign more than the other way around, but it is still possible for Aquarius to be the one to attract Leo.

Both of these signs are outgoing, and they will be attracted to this quality in each other. This simple commonality will get them to start talking in the first place. When the Leo dates the Aquarius and once they get deeper into the conversation they will realize that they have even more in common with each other. These two sun signs are able to entertain each other for hours just by talking and sharing ideas.

For a moment the Leo personality will even forget about their business endeavors as they are so interested in the Water Bearer. Aquarius will be thrilled to find someone who is so knowledgeable about the things that they are passionate about. Their conversation will be full of lively banter. Just from this first conversation the Leo Aquarius soul mates will be able to tell that the other is just as adventurous and craves to lead an exciting life just as they do. The way that they talk to each other is perfect, as it puts their high levels of self-confidence on display, a trait that is desirable in a partner by many signs.

In this Leo and Aquarius compatibility, these two will love all of the attention that they are getting, Leo especially. It is likely that Aquarius will flirt with him or her during the conversation, which will boost their self-esteem even more. Leo will want to do everything that they can to keep Aquarius’ attention on him or her, but this shouldn’t be hard as long as he or she can keep the conversation exciting.

In a Leo Aquarius marriage, the Aquarian might wander off if he or she starts to become bored. This couple is sure to have a satisfying relationship if they can keep most of their days together as exciting and engaging as the day when they were first attracted to each other. If they can do this, then it is not likely that they will want to wander away from each other leading to a Leo and Aquarius breakup.

Although there is a great attraction in this Leo and Aquarius love compatibility, their few differences can make a big impact on their relationship if they can not work with them or around them. Let’s look at some of the cons of a Leo Aquarius friendship.

While their conversations are something out of a perfect book or film dialogue, it can sometimes become dull. When this happens Aquarius can become distracted and put their focus on something else. Leo will be extremely offended by this, even if the Aquarian doesn’t realize that they are doing it.

When the Leo Aquarius are in bed, the lion likes to have all of the attention focused on him or herself. And when it is not their fragile ego can start to crumble. Leo also likes to have most of the power in the relationship, which many signs are not attracted to. Aquarius is no different. They know that they are smart and creative enough to make good decisions for the relationship. And their feelings can be hurt if Leo does not take their thoughts and feelings into consideration when making choices for the both of them.

Like in most relationships, communication is important for this Leo Aquarius compatibility to function well together. Aquarius will have to work on sharing all of their ideas more, and Leo will need to learn to actually listen to their ideas if things are to work out well. The Leo Aquarius marriage requires a decent amount of compromise, as many relationships do foretell love astrology predictions.

These two signs have some differences when it comes to the Leo Aquarius sexuality as well. Leo wants sex to be more physical, while Aquarius wants it to be more mental. This can lead to complications, sexually. Aquarius likes exciting and thought-out foreplay. They will not want their sex-life to become routine or boring. They will want to craft a new scene every time. Leo will simply want to be pleasured. While they do want to be able to please their partner, sometimes it will seem like Aquarius is asking too much.

The Leo star sign will want their partner to satisfy them, more than they want to satisfy their partner. Sometimes it will seem like these two will need to take turns playing out their own desires, as it is hard to do both things at once. Overall, if these two signs don’t learn to communicate with each other, then things are not likely to work well for this Leo and Aquarius marriage compatibility. They need to learn to tell each other want they want, and listen when their partner is telling them what they want as well.

In conclusion, a romantic Leo and Aquarius compatibility is one that is likely to be started with an instant attraction. Conversation and dates at first will be exciting and new, but as time goes on these two signs will need to learn to communicate on a deeper level so they can better understand each other’s wants and needs.

If this couple is able to keep their initial spark and nurture it until it becomes a passionate, but constant flame then this Leo Aquarius love compatibility should be able to work out.