The Venus In Pisces: Significance and Meaning

What Does Venus in Pisces mean?

The Venus In Pisces: Personality

Pisces is a dreamer, which makes Venus in Pisces the most romantic of all the zodiac. They are charming and playful. And, they want to give you a wonderful experience you’ll never forget. They are sensitive to everyone’s needs and will do whatever it takes to help their loved ones.

Venus represents love, passion, romance, sex, relationships, pleasure, and the value we place on things that please us. They are often lost in their world. Venus in Pisces is more concerned with creating a fantasy land where they can control all the bad things that happen.

And they want others to join them in this happy place, where they can keep them safe and comfortable. They can get as close to unconditional love as is possible for one person. And, sometimes sacrifice their health or happiness to help those in need. 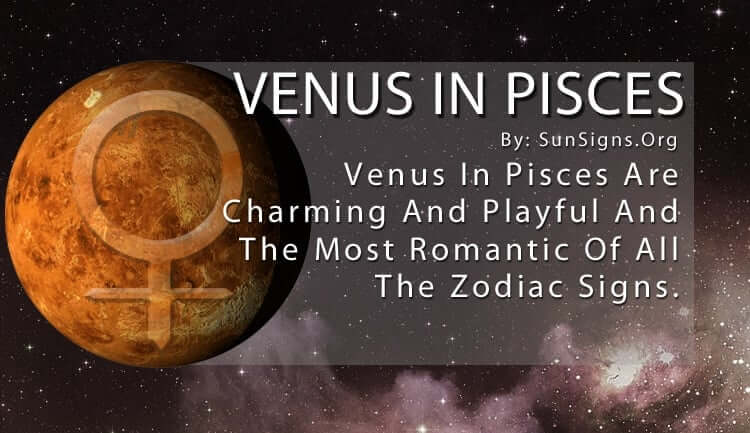 Positive Traits of the Venus in Pisces

But being this sensitive allows Venus in Pisces the pleasure of courting someone and pulling out all the stops to show how much they care about a potential partner. And when they finally make the commitment (which will admittedly take some time as they are slow to act), those displays of affection won’t stop.

They thrive on grand gestures and sweeping actions to show their love and gratitude. And, they will continue to do so throughout the relationship. They don’t even ask for a thank you in return. They don’t mind a little inequality in that regard.

It helps them to feel as if they are putting as much effort into a situation as they possibly can without selfishly asking for a reward. This way they can feel like a knight in shining armor (or perhaps a guardian angel for the opposite gender).

Negative Traits of the Venus in Pisces

Venus in Pisces thrives on playing the savior or martyr. It fits into their daydream nicely. But that can become a problem because often other people will try to take advantage of them. They have to be careful not to get pulled into a scam or let someone walk all over them.

The only thing to be careful about with Pisces Venus person is their tendency to let other things like errands and responsibilities slide. They don’t want to take care of the mundane details of the real world because they are too dull and boring. This means you can’t always rely on them to handle things for you – it’s usually the reverse. And they have minimal direction, which can make them seem lazy or lacking in ambition. (Understand the Pisces man or Pisces woman better.

All you need to do to keep the attention of the Venus in Pisces is play along with their games and fantasies. It will always be a pleasurable and magical experience. And, they love when others indulge them. They put forth so much effort, and it’s much more enjoyable when they can share their “work” with someone.

Thankfully they are so accepting of others they often have a large social network to help them out when things get too hectic for them. They can also tell little white lies from time to time because they hate hurting anyone’s feelings.

Just know that everything they do is to keep you out of harm’s way, whether it’s the best thing or not. While Venus in Pisces can be frustrating with their passive ways, they will love you for who you are no matter what.