The Venus In Leo: Significance and Meaning

Venus in Leo people love being the center of attraction.

The Venus In Leo: Personality

Love is grand to a Leo, and Venus in Leo is even grander in love. This is their favorite thing in the world, and they will go to great lengths to ensure their relationships remain exciting. As long as their partner feels the same way they are all set.

Venus represents love, beauty, relationships, finance, pleasure, balance, and artistic temperament. Leo is all about big gestures and dramatic displays of affection. So, they show their love in physical ways. Venus in Leo is caring and considerate and will do anything to protect the ones they love.

And all they ask in return is your undying love, devotion, and complete attention at all times. Because they do so much for others, they demand the same kind of generosity from those same people. And if their inflated expectations aren’t met time and time again, they will unleash their lion’s roar. 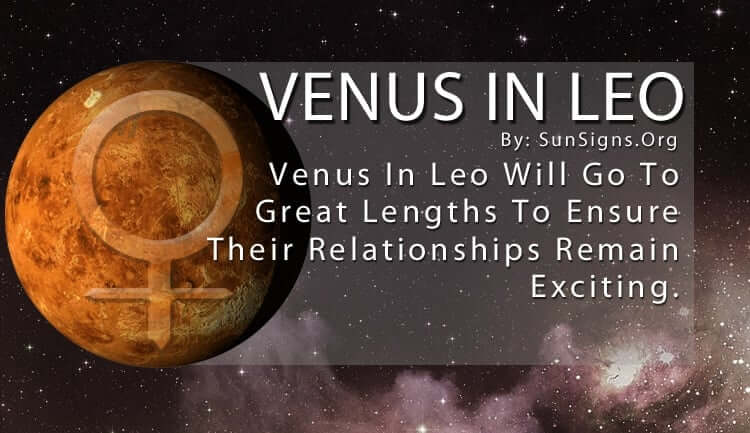 Positive Traits of the Venus in Leo

The Venus in Leo zodiac sign wants only the best out of life, love, family, and friendship. They refuse to settle for anything less than spectacular. Because of this, it’s difficult for some people to handle a relationship with Leo Venus. But if they can hang on for the ride, it’ll never be boring.

The most important thing to Venus in Leo is passion. They have an abundance of it and want to share it with the world. That’s why they need a partner as fiery as they are to keep up with their spontaneity and sense of adventure. But if you’re able to spend a lot of time with your Venus in Leo and prove your loyalty, they will follow you to the ends of the Earth.

Negative Traits of the Venus in Leo

The Venus in Leo can’t stand when anything becomes too slow or comfortable, because they believe that’s when people get too complacent in life. They want a whirlwind romance with someone who constantly desires them and needs to be near them at all times. They need constant admiration and praise, and can’t stand when others don’t give it to them.

And if their lover doesn’t live up to these high standards Venus in Leo will complain that they’ve become too content with a mediocre relationship. Even though things are perfectly stable and secure, it won’t be enough for them.

They would rather throw caution to the wind and risk everything than settle down in a boring partnership. If they aren’t consistently entertained and stimulated they grow restless and depressed and they let you know it.

When Venus in Leo is happy, they reward their social circle with lavish gifts and fun outings. They enjoy spending money on leisure activities and will treat those who appreciate their amazing personality. Allow them to show off their wealth and prosperity, for they thrive on impressing other people.

And don’t get too upset when they brag about the opposite sex flirting with them. That’s part of how they show off to their partner. Being desirable is very important to them, so jealousy plays a big role in their relationship.

As long as the circumstances remain harmless, this can be a healthy way for Venus in Leo and their partner to reconnect and try new things. Keeping them satisfied can be a daunting task, but they will return the favor ten-fold. If you’re looking for a challenging yet rewarding relationship, Venus in Leo will never disappoint!