The Venus In Aquarius: Significance and Meaning

The Venus in Aquarius people make love partners of a different kind.

The Venus In Aquarius: Personality

Unconventional is the word to describe Aquarius, and it’s no different with Venus in Aquarius. They don’t want a traditional relationship based on what society thinks is good for a partnership. They make their own rules and follow their path. And, they want someone next to them who understands.

Venus symbolizes sex appeal, romance, ambition, love, relationships, pleasure, money, finance, and beauty. Venus in Aquarius uses their intellectual prowess to show off for a potential mate. They are looking for someone who appreciates their active mind. They pride themselves on being forward thinkers. And, they need someone they can talk to and debate with on all their ideas. 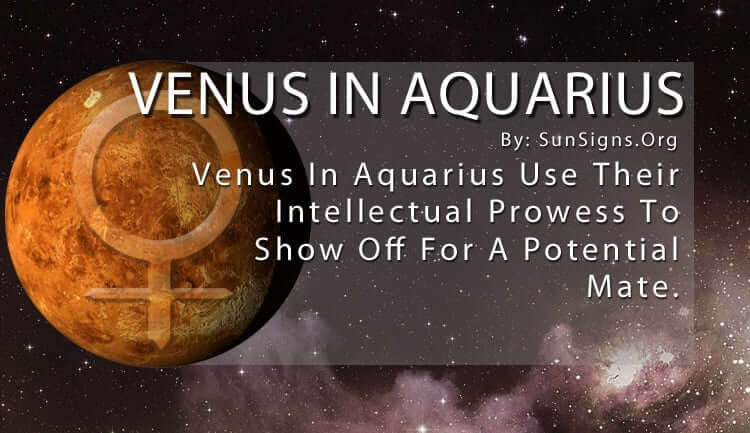 Positive Traits of the Venus in Aquarius

As an air sign, Venus in Aquarius doesn’t care much about the physical realm. It’s all about stimulating their mind. Admire their brain power and compliment them on their creative thought process. Being unique and innovative is the very essence of their personality.

They will surprise you with offbeat date ideas and are impressed when you come up with some of your own. And when it comes to intimacy, they need someone who is also their best friend, not just their lover. Venus in Aquarius is passionate, but more about their beliefs than their sex drive.

It’s never dull being with Venus in Aquarius. So, be prepared for anything to happen. One day you’re at home, relaxing and watching a movie. And, the next you’re whitewater rafting down a wild river you’ve never heard of. They love to surprise others, and they need someone who can go with their flow. (Find out how it is dating an Aquarius man or dating an Aquarius woman)

Negative Traits of the Venus in Aquarius

It can be frustrating sometimes for others who are more emotional than logical to interact with Venus in Aquarius because they despise outbursts. Their practical nature doesn’t allow them to become emotional about anything, although that doesn’t mean they don’t care. They do come off as acting superior though, which is something they need to be careful of when dating that special someone.

Because they feel they are above the normal social conventions, they often appear aloof or detached when interacting with people. And if you don’t know them well, this can be a turn-off. Although, the Aquarius Venus will have no idea what you’re talking about. They are continuously misunderstood because they have their oddball way of doing things that makes perfect sense to them.

This is why the Venus in Aquarius people hate rules that they think are extraneous or too confining. They need the freedom to explore things in their way and come up with their conclusions. Allow them to be themselves, and they will do the same for you. This also makes them incapable of being jealous because they are so open-minded to whatever the situation becomes.

Don’t be possessive or constricting, and they will show you a new world of possibilities. They thrive on adding to their wealth of knowledge. So, go along on their unique adventures. While they may seem detached at times, they want someone to share their life with.

Venus in Aquarius woman or man are just not programmed to show it regularly. But if they love your company, you will find them spending more time and money on you than anything else. And if you play your cards right and maintain a good poker face, they will be intrigued by your mysterious nature. They can’t resist a good puzzle to solve.