Can Taurus woman Pisces man be together mentally, emotionally and sexually? While earth and water can sometimes mix in a messy fashion, the female bull and male fish unite in a more harmonious manner. She’s the ground that his water flows over, and they create a wonderful environment for things to grow. Together, the Taurus woman and Pisces man in love lead a life of peace and tranquility. Which zodiac sign is the best in bed? Which zodiac couple is the best? Get answers to all these questions.

In the beginning of a Taurus woman Pisces man relationship, she is attracted to the mild-mannered Piscean for his gentleness and sensitivity. He recognizes similar personality traits in her, and notices her inclinations toward rational thought and loves her for it.

Taurus woman is a stable zodiac sign who enjoys building a secure home life, and he craves quiet over drama. He’s thrilled to learn she is so protective of their household, and the Pisces man works with her to maintain the peace. The Taurus woman and Pisces compatibility is excellent.

The Pisces male can be a bit nervous around such a charming woman, but she will instantly put him at ease. Because she is more submissive, he sees her as safe and non-threatening.

His sophistication matches the Taurus female’s beauty and grace, and there is an instant attraction between these two. Because he can be delicate, he needs a steady partner to reassure him that she is his in this Pisces compatibility.

And the Taurus woman date will be his forever once they commit, but it will take time for the analytical Taurus to make up her mind. This suits her Pisces lover just fine as he likes to take things slow. (Find out more about the Pisces man).

But once the Taurus woman Pisces man soulmates decide to bring things between the sheets, their mutual desires and love for each other are taken care of through shared affection and romance in this Taurus compatibility.

The Pisces man’s softer side appeases her need for sensual lovemaking, and she steadies him when he is unsure of his actions. Both Taurus women and Pisces men, take the time to satisfy their partner physically, mentally, and spiritually, creating a strong emotional bond. The Taurus woman’s alluring nature can bring his head out of the clouds and back down to earth where she has firmly planted the roots of their union.

The Pisces man sexually will follow her lead and help create a sense of intimacy the likes of which neither one has ever seen. The Taurus woman and Pisces man friendship make sense in every aspect of their lives, and once they’ve both decided to commit to the relationship, they are in it for life. (5 secrets of happy couples). 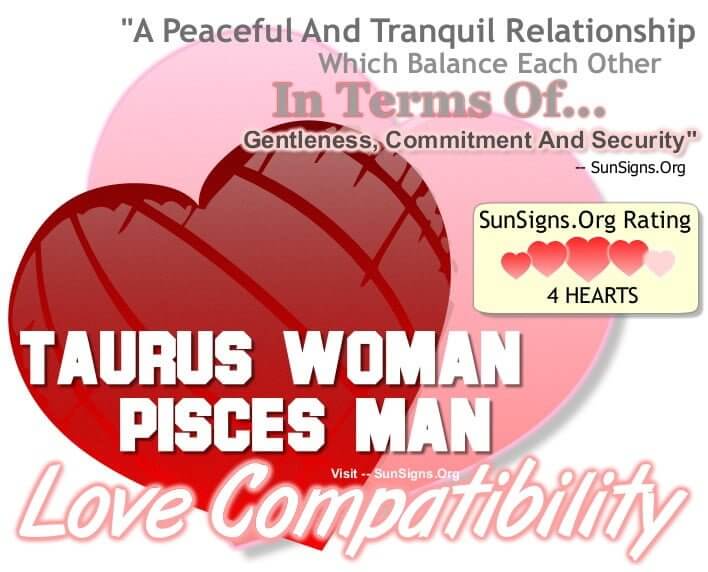 The only time the Taurus female in love grows impatient with her lover is when his lofty ideas take him out of her realm of primal pleasure. He can concentrate too much on empty romantic gestures, while she simply needs him to be there at the moment with her. Thus some work is required when it comes to the Taurus woman Pisces man, sexually satisfying each other in bed.

Another thing, they need to be careful in the Taurus woman Pisces man marriage, is of her wild temper. The Pisces man in love is normally calm and unassuming, so it would take a lot to bring out the bull’s rage. (How compatible are you in marriage?).

But because he can be a bit of a dreamer, he may not always take care of his responsibilities, and this can drive his Taurus mate crazy. She is the caretaker even when the Taurus woman is dating the Pisces man. But she also looks for a responsible partner to help her maintain the balance in their lives.

The Pisces man dating her appreciates her efforts of course, but sometimes he needs to be reminded of the goals they set for them. She can be overly stubborn about her expectations of her lover, and she is devastated when he doesn’t live up to them. This hurts his sensitive nature, and it will take time for him to recover. This might even lead to a Taurus woman Pisces man breakup.