Mercury in the First House of the Natal Chart

What happens when Mercury is in 1st House? You are always in a hurry to move on to your next adventure or project.

As energetic as you are, Mercury in the 1st house makes you restless and distracted. You tend to talk a mile a minute because you have so much to say. But because of that, you can take over a conversation without realizing it. Try to slow down a bit.

You can’t help but get excited and fascinated by new topics, and your curiosity is insatiable. You want to learn as much as possible in as short a time as possible because you are constantly moving on to the next thing. Patience is not your strong suit – you want instant gratification.

Plus, people with planet Mercury in 1st house and Aries being the ruling zodiac sign, like being first on the scene for everything. You have to be careful though because you tend to rush into matters without fully thinking them through and that can get you into trouble. 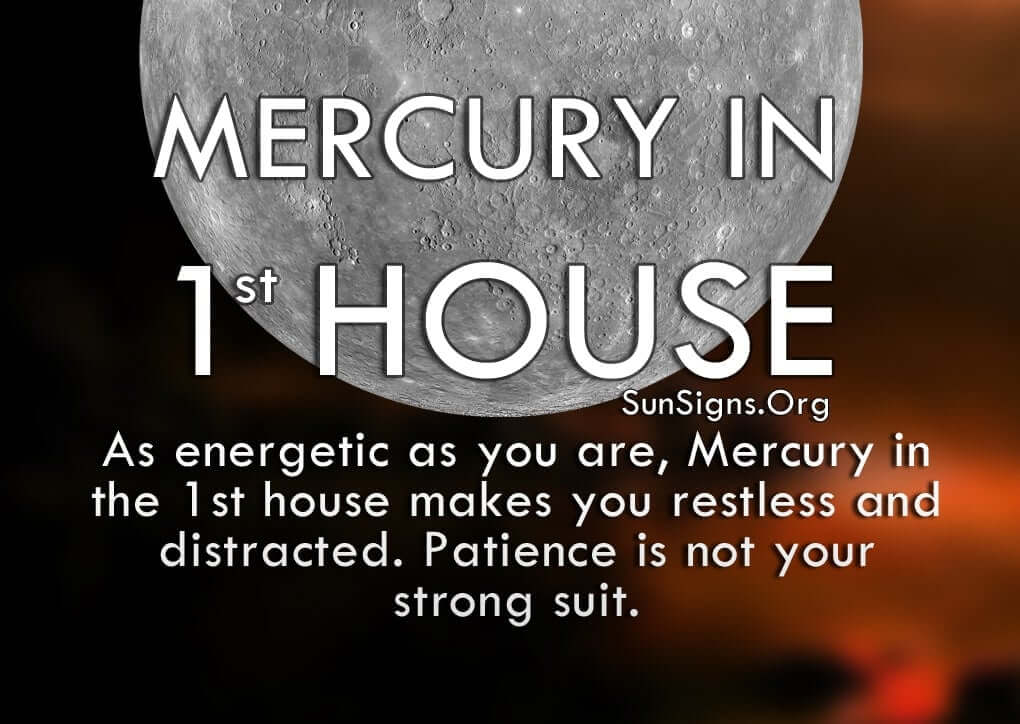 If you have Mercury in the first house in your natal chart, the thrill of the unknown drives you. You have to figure out what’s going on at all times. One good thing about your vitality is that you can change with the times. Because you are always on the move, you are very adaptable.

Mercury symbolizes communication. It also showcases how we express ourselves and our feelings. And that’s a plus considering you don’t like to think too far ahead with anything. While you are great at beginning new projects, you don’t have the knack to follow through until the end. So you often have to adapt to your surroundings or else you would never get anything done.

This also makes you quite versatile, as you like to try new things that are outside of your comfort zone. And your lively personality makes others want to follow your lead.

The Mercury in 1st house personality monopolize people’s discussions and turn the subject matter toward something they are interested in. Often you’re too busy thinking about what you want to say to hear what everyone else is saying. While your enthusiasm is often infectious, others may see it as rude.

Stop and listen once in a while and you’ll learn even more. Your boisterous nature can sometimes come off as brusque or insensitive, but people always know where they stand with you. (You can understand yourself better with your Mercury sign reading).

With Mercury in the 1st house, you are loud and uninhibited and say what’s on your mind. You don’t like it when people beat around the bush because you are more straightforward with your thoughts and emotions.

The Mercury in 1st house meaning shows that you speak with flair and often when you talk, people listen. You command attention with your bold approach to everything you do. But if you want people to continue to listen, you have to learn the give and take of a productive conversation. Mars being the ruling planet for 1st house, you might end up being aggressive.

It’s not always about getting your point across or winning an argument. Sometimes a discussion is just an exchange of ideas, and you have to allow the other people their turn to express their thoughts and opinions. They will respect you more and give more validity to your statements.

When you go off on a tangent about something, people tend to look away and not pay attention to what you’re saying. But if you have well-constructed arguments and can present them cleanly and concisely, you will get anyone’s attention. You have to learn to think things through, and you will always have an interested audience.