How compatible are Capricorn women and Aries men mentally, emotionally and sexually? The earthy Capricorn woman can sometimes be stifling to the fiery Aries man. She is stable, steady and dependable while he is bold, brash and daring. The Capricorn woman and Aries man do share some traits, but they are both too stubborn to notice. They will have learn to compromise and it won’t be an easy relationship.

Neither star sign will disappoint in sex, for she is as steady in the bedroom as the Capricorn female is in other areas of her life. And the Aries male is incredibly passionate, taking her sexual pleasure to new heights.

There is no easy way to move past deciding who is right except to talk it out, and that is where they both excel. Luckily, if they decide to commit to each other, both sun signs are in it for life even though their love compatibility isn’t too great. 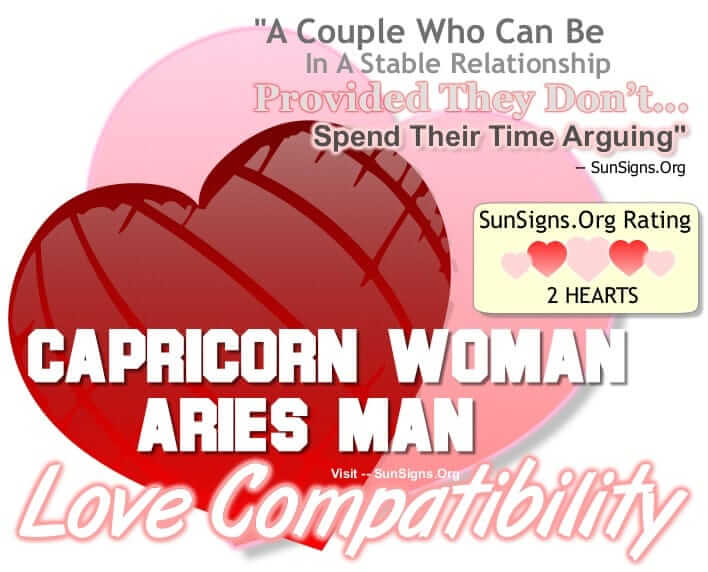 The Aries man barrels ahead, veering off the plotted course and stomping on everything in his way. The Capricorn woman finds this thoughtless and abhorrent, and he finds her stuffy and boring. The only way the union between these two sun signs can work is if they share the same goals.

That way, the Capricorn and Aries can work toward a similar task and not interfere with their partner’s methods. This is particularly helpful because they both want to take charge of the situation, and the Aries man could never allow that. As long as they can come together in the end and agree to disagree, the Capricorn Aries pair will be able to make it past their differences and focus on their attraction.

And there is sexual tension between these two zodiac signs, for the Aries male wants her to let loose and have some fun, and she wants to test his stamina. This is an unspoken dare between them, until he pushes her too far and the Capricorn female drags him into the bedroom.

But once the initial questions are answered, the Capricorn woman Aries man match will have to deal with their partner’s idiosyncrasies. He is intense and pushy in bed, and she is the exact opposite. She hates when he tries to take the lead, and he hates when she makes demands on him. They will both have to relinquish some control when it comes to their lovemaking, because they have certainly met their match when it comes to stubbornness!

The stubbornness extends outside the bedroom as well, for the Capricorn woman and Aries man have very different ideas on how to lead their lives. He is always on the go, moving from one adventure to the next, while she is more of a homebody. She likes to travel too, but she is not as active as this firecracker.

Capricorn women and Aries men will often butt heads when it comes to social events, for he wants a night out on the town and she’d rather a quiet romantic evening. And the disagreements don’t stop there. While the Aries man works hard and is usually successful, he also likes to spend his money like it’s going out of style.

The Capricorn woman, on the other hand, would rather save it for a rainy day. It will be difficult when both partners are so sure their way is the right one, and his quick temper will come up against her rooted temperament.

Capricorn is a cardinal earth sign whereas Aries is a cardinal fire sign, the Capricorn woman Aries man compatibility gets a TWO Hearts rating. The Capricorn Aries couple will have to work to find a balance, where she lessens her hold on him and he adjusts his attitude to help with the responsibilities.