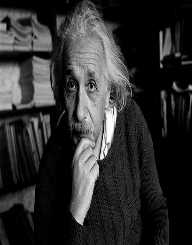 Albert Einstein was born on March 14, 1879, in Ulm, in the German Empire, Kingdom of Wurttemberg. His father Hermann was an engineer and a salesman, who married his mother, Pauline, when she was 18 years old. The Einstein family was non-observant Ashkenazi Jews. Albert even went to Catholic elementary school in Munich. When he was eight years old, he transferred to Luitpold Gymnasium.

In 1894, his father’s company lost a bid to supply Munich with electrical lighting. The company lacked the capital to make the necessary changes from direct current to more efficient alternating current. This loss caused his father sell the business. The family needed a new source of income, and they moved to Italy.

Albert stayed in Munich to continue his studies. His father wanted Albert to pursue electrical engineering. Einstein resented the teaching methods and regimen in his school. In 1894, he joined his family in Italy. Next year, he sat for the entrance examinations for the Swiss Federal Polytechnic, where he failed to reach the necessary scores in general part, but achieved high results in mathematics and physics.

Albert Einstein then attended the Argovian cantonal gymnasium in Aarau. In 1896, he renounced his citizenship of German Kingdom to avoid military service. After finishing gymnasium, he enrolled in a four-year mathematics and physics program in Zurich Polytechnic.

After graduating from Polytechnic, Albert Einstein spent almost two years searching for a technical post. In 1901, he got Swiss citizenship. Later he found a job at the Federal Office for Intellectual Property and assistant examiner. His career was to evaluate patent applications for devices. During this time, Einstein learned a lot about how machines work. He had to do a lot of experiments with electrical signals, transmitting these signals and synchronization of time.

Eventually, it led him to his conclusions about the nature of light and connection between space and time. In 1902, he and some of his friends started a scientific-philosophical club The Olympia Academy.

In 1900, Einstein published his paper Conclusions from the Capillarity Phenomena. In 1995 he completed his thesis and was awarded Ph.D. from University of Zurich for his dissertation – “A New Determination of Molecular Dimensions.” The same year he published four more groundbreaking papers. At the time, he was only 26 years old.

By 1908, Albert Einstein was already recognized as a leading scientist. He started to work at the University of Bern. In 1911, he accepted Austrian citizenship and began to work at Charles-Ferdinand University in Prague. During this time, he wrote 11 scientific works about radiation mathematics and also the quantum theory.

In 1914, Einstein returned to the German Empire and was appointed the director of Kaiser Wilhelm Institute for Physics. At the time, he was also a professor at the Humboldt University of Berlin. In 1911, Einstein created a theory of general relativity, which meant that the gravity of Sun should bend light from another star. In 1919, Sir Arthur Eddington proved his theory during the solar eclipse in 1919. These observations made Einstein internationally famous. In 1921 he was awarded the Nobel Prize in Physics.

During 1921 and 1922, Albert Einstein traveled abroad and gave lectures in USA, England, Asia, and Palestine. He also visited Singapore, Ceylon, and Japan. He was seen as not only a brilliant scientist but also as an activist and person with a feel for art.

In 1931, Einstein traveled to the U.S. the second time and returned there again in 1933. At the time, he knew that he would not be able to return to Germany since the Nazi power was rising.  He took a two-month visiting professorship at the California Institute of Technology. He and his wife went to Belgium and learned that the Nazis had confiscated their cottage and sailboat. He went to the German consulate and tuned in his passport, officially renouncing German citizenship. His cabin was later turned into Hitler Youth camp.

By 1933, the German government had passed a rule, banning Jews from any official positions. Albert Einstein was listed as the enemy of German regime and had a bounty of $5000 for his head. His works were targeted in Nazi book burnings. Einstein was personally invited by the British Naval Commander Oliver Locker-Lampson to come to England.

After moving to England, he also met Winston Churchill and Austen Chamberlain. Einstein asked to help bring Jewish scientists out of Germany. He also asked the prime minister of Turkey to invite German-Jewish scientists to work in Turkey. As a result, Turkey requested and saved more than 1000 individuals. Einstein couldn’t extend his British citizenship, and accepted the offer from Princeton Institute for Advanced Study and became a resident scholar. In 1935, he finally applied for U.S. citizenship.

In 1939, Washington was alerted by a group of Hungarian scientists about ongoing Nazi atomic bomb research. The warnings were discounted at first. One of the group’s scientists, Leo Szilard contacted Einstein and asked him to help alert the U.S. government that Germany could win the race to build an atomic bomb. Einstein used his contacts and sent a letter to President Roosevelt, recommending the U.S. to pay attention and engage in nuclear weapon research.

Albert Einstein was a passionate civil rights activist. Einstein learned to play the piano when he was 5, but later discovered Mozart’s music and learned how to play the violin on his own.

In 1903, Einstein married Mileva Maric. The couple met while studying in Zurich Polytechnic.  Letters between them suggest, that before they were married, they had a child who died or was adopted as an infant. It is believed that Einstein never saw the baby. Their son Hans was born in 1904, and the second son Eduard was born six years later.

Maric and the kids moved to Berlin, while Einstein was working in Zurich. A couple of months later she found out that Einstein was romantically interested in his second cousin Elsa. In 1919 Einstein and Maric divorced, and the same year he married Elsa. They had a personal relationship already since 1912. Einstein also wrote letters to his early love Marie Winteler, about the failure of his marriage and missed life.

In 1955, Einstein died after rupturing of an aortic aneurysm. He declined any surgery because he believed that it is tasteless to prolong his life artificially. Albert Einstein died in Princeton Hospital at the age of 76. His brains were afterward preserved by Princeton’s pathologist Thomas Stoltz Harvey.