How good or bad is the love compatibility between a Libra and Pisces emotionally, mentally and sexually? Read on…

The Libra and Pisces in love in a romantic relationship will be friendly and even tempered. They will be very compatible. They will typically have a smooth relationship. They will both be attentive to the aesthetic side of life.

However, they have a lot to give each other. If Pisces is lost in a fantasy world, Libra can help to balance them and get them back on track. The fish sign will be able to help their partner see the beauty that is in love and empathy. They will have an honest relationship. They will both value truth and balance in the Libra Pisces relationship and in the world.

The Pisces zodiac can be very good friends with the Libra and very good in a romantic relationship. They will both be able to understand each other. They can both be somewhat indecisive. Because of this, they can both focus on several different directions at once. They will not be likely to have trouble. At the same time, Libra can be too mentally manipulative for Pisces. They might both easily stop mid action because of their indecisive natures.

When the Libra Pisces soul mates work together on a project, whether it is their romantic relationship or another project, it might be hard for it to move forward. If there is a disagreement in the Libra Pisces friendship, they usually forgive and forget quickly. Librans do not like arguments and they will do what they can to avoid them. Pisceans have a lot of empathy. Because of this, they can forgive their partner’s position out of understanding.

The influence of Jupiter and Neptune will give the Pisces personality an intense meditation and philosophical and internal nature. The influence of Venus will make the Libra believe in love. This is the star sign of partnership. They will always be more comfortable when they are in a close romantic relationship.

Pisces is a Water sign and Libra is an Air sign. They will be able to mix their heads and their hearts to solve all their trouble. This will be a winning mix for them. The best decisions are usually made with both emotions and intellect. The Libra Pisces compatibility will be very flexible and progressive. When they have trouble, they will not be able to communicate with each other.

The Libra man or Libra woman can be mentally manipulative and they might give the Piscean the silent treatment. Their relationship will always have an undertone of friction. However, neither star signs will ever be the true leader of the relationship. They might have a lot of arguments but their differences of opinion will not last long. They might have trouble because they are likely to slow down almost to a stop when they are together.

Pisces is a Mutable sign. They will be happy to work with the scales sign. Libra is a Cardinal sign. They will think up new ideas and start new projects. They can take any role they are given. They will like having recognition. They might think of a new idea and then lose interest. The Libra Pisces love compatibility will work well together when they work on a project that is different from their romantic relationship. They are both very modest. The Pisces man or Pisces woman will be happy by their side. They will not mind changing direction. 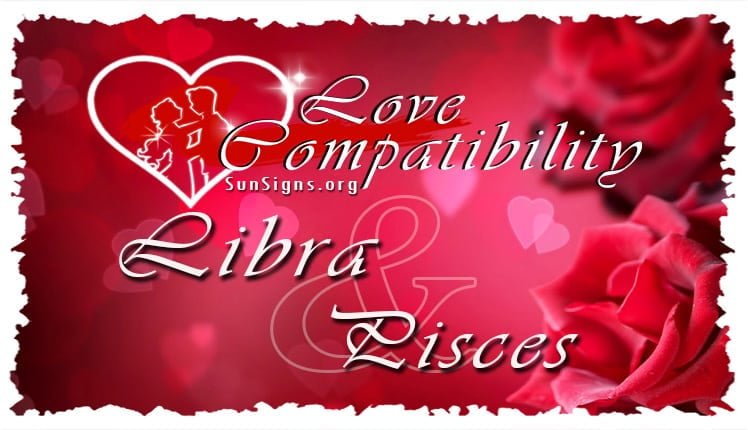 The best thing about the Libra Pisces compatibility in a romantic relationship is that they are both interested in helping other people and the world around them. They will have comparable levels of excitement and energy. They will both want a genuine relationship.

Libra and Pisces soul mates will be two of the most romantic and loving signs of the zodiac. They will be expressive and affectionate in a relationship. It will have a lot of romance from flowers to poetry to close and intimate dinners. They are both sentimental by nature. They will make a beautiful and soulful home together. They will have a lot of love and respect for each other. However, the Libra Pisces compatibility will not be completely smooth.

The Pisces born is the mythological dreamer of the zodiac. They will live in a fantasy world that is far away from stress and strain of everyday life. Libra is the mythological idealist of the zodiac. They will always be looking for perfection in everything, whether it is their partner, or their life. In a way, they are looking for what the Fish already has. The Scales sign will want the dream to be a reality. However, the Pisces will be happy to let it be a dream. The Libra Pisces love compatibility will be tested when reality threatens the romantic life they build for each other.

Libra dating Pisces can be less compatible when life gets rough. They will have needs that are opposite of each other. Libra will need to discuss everything and rationalize it so that they can think of ways to get back to the idealistic state. At the same time, the Fish might be overwhelmed by the emotion of it all. They will likely withdraw from the situation completely. They will not want to talk. They will look for emotional support from each other which they cannot give.

If there is stress and pressure, the Libra male or Libra female might feel like the Pisces is too vulnerable and needy. At the same time, Pisces will think that Libra is too emotionally distant and not in touch with their feelings. The Libra Pisces in bed can be sexually compatible when things are good. When things are bad, their love compatibility can evaporate much like water blown by wind and lead to a breakup.

Pisces and Libra might both turn to escape as a way to cope. Libra will use strategy and hope for the best. However, they will not confront the problem. They will want to avoid arguments. Pisces will lie to cover up anything being wrong. They might turn to drinking or drugs to cope with their own depression. They will be depressed when their illusions and dreams are broken. The Libra Pisces compatibility will mean a healthy dose of reality. However, neither star signs might be emotionally ready for it.

The heart of the Libra Pisces relationship will have a common kindness. Both sun signs have good, true, decent and loving hearts. They might be less compatible when there is stress. However, the Libra Pisces love compatibility will have a spiritual bond that can overcome the trouble. When they are in love, they will both be very romantic and will want to do what they can to keep their relationship. They will have a very strong commitment to each other. If they work well together, they can have a kind of magic in their relationship.