You are a Pisces woman if you were born between February 19th through March 20th, depending on the year. The Pisces woman personality could just be the most mature and sophisticated of all the zodiac signs.

The Pisces sign in general sort of takes the best qualities from all the other star signs and makes them its own. Pisces women always seem to know what they are doing now and what they are going to do next.

The Pisces woman characteristics show they are always prepared for the next move. They aren’t afraid of the future. In fact, they are always ready to take it head on. There is little in this world that can break a Pisces women’s sense of being. 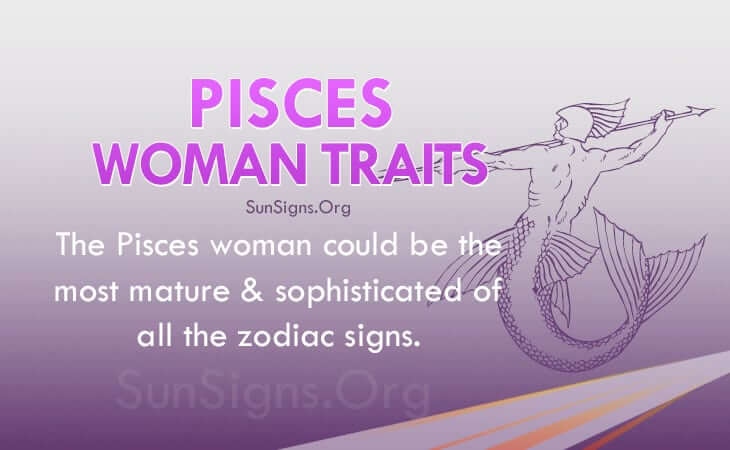 The Pisces woman personality traits show that she knows all too well how having emotional troubles can seem to drain a person of their energy. Because of this, the Pisces female takes the time to help other people with their troubles as often as she can.

She is a good listener and she is also great at giving advice. Many of the Pisces woman’s friends see this as a rather helpful zodiac trait, and they are glad that she has it.

The Pisces woman personality can be very empathetic at times, which could also influence her own emotions as well. This could complicate her life, but she doesn’t mind so long as she can help others.

The Pisces lady’s life is bound to pull her in many directions throughout her lifetime. This could lead to good and bad situations, as every person’s life has. Luckily, the Pisces woman is great at adapting to new situations and surroundings. This is what makes her so great at taking on new challenges.

It’s not that she always know what’s coming up next. It’s that she knows whatever is going to happen next that she can handle it.

The Pisces woman characteristics show that since she is so flexible, she can thrive in every aspect of life, so long as she works hard and keeps her spirits up.

Because the Pisces woman personality has some of the best traits from all of the other star signs, she may sometimes seem to be all over the place in her thoughts and actions. She can be easily distracted at times, while being entirely focused another day. It all depends on the topic of conversation and the timing.

The Pisces woman traits shows she can be a daydreamer, which is a trait that she likely got from the Aquarius star sign. She will have her own way of looking at the way, and this could either cause her to be distracted or to make up wonderful ways of solving the world’s problems in ways that no one has ever thought of before.

The Pisces woman characteristics show that her emotions seem to be as numerous as the stars in the sky. Her feelings are often complicated. She rarely feels simply happy or sad, she always feels like there should be a more specific set a words in which she could use to better express how she is feeling.

This could make a Pisces women seem bipolar to others who do not know her well, or she may even be diagnosed as being bipolar, or emotionally unstable. The Pisces likely takes this trait from Gemini, who often have trouble with their various emotions.

The Pisces woman personality traits show she is practically in love with the idea of being in love. The woman  born under the sign of the Two Fishes wants her life to be full of romance, and it usually is. She may have trouble knowing exactly what she wants in a partner at first since she has so many facets to her personality.

She is likely to experiment with different types of partners at first. This is likely to cause her to have many short-lived relationships once she first started dating.