The Sun In Aries: Significance and Meaning

The Sun in Aries people are one of a kind. They are the leaders of the crowd and always very innovative.

The Sun In Aries: Personality

In astrology, the Sun stands for one’s individuality, and the Aries Sun people are fiercely independent.

As the first sign in the zodiac, Aries is a natural trailblazer, and the Sun makes them more straightforward. They start projects with enthusiasm and do whatever it takes to finish them. There’s no stopping this force.

This means they can be impulsive too, though. And, they don’t understand why others don’t follow them as quickly as they act. They don’t rely on emotion or even strategy. They steamroll forward until the job is complete.

They don’t have the patience to wait for others to determine the best course of action, for they instinctively know what to do. Whether it’s right or wrong the Sun in Aries people, act on impulse based on what’s happening in the here and now. 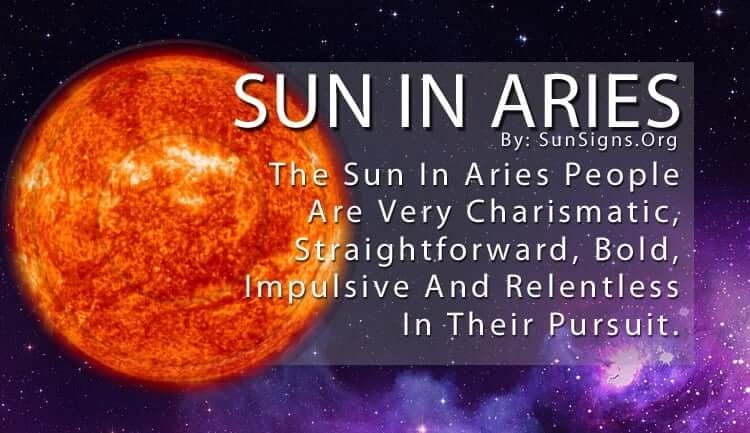 Positive Traits of the Sun in Aries

The Sun in Aries characteristics shows that these people are also very charismatic. They have great stamina to get the party started and keep it going for a long time. Things are never dull around them, as they crave excitement and adventure. They are full of the fiery warmth and energy that comes from the Sun. This is why they love a challenge and will meet it head-on. They will do whatever is necessary to complete the task.

Because of this energy, the Sun in Aries gets people going, making it a great time to begin new projects. They usually have creative ideas and great theories to put into practice. And, others often see them as visionaries because of that. But, they would rather do something physical to expel all of that energy. The Sun in Aries makes them even more active than usual.

Negative Traits of the Sun in Aries

The Sun in Aries people have compiled a lot of experience in their various endeavors. This makes them a major asset. But this bold attitude can sometimes be overbearing to others. Their brash manner comes off as mean or hurtful. Often their aggressive behavior gets in the way of someone else’s well-constructed plan. And they’re not very subtle when they disagree.

The Aries Sun people have a quick temper and can burn bridges if they’re not careful. But they also can forgive and forget. So, if you confront them and argue your point, they will listen.

Even those Aries zodiac sign people, who may not be as bold or aggressive as others still feel the strong influence of the Sun in their way. They can be teachers, scientists, politicians, or other professions who use words instead of physical confrontation to get the job done.

But the Sun in Aries people too stop at nothing to achieve their goals. With the Sun shining down upon them, their way is lit and clear. They see no confusion or obstacles in their way that they can’t overcome.

Their drive to succeed is as large as their ego, making them relentless in their pursuit. And even if they get knocked down, they will jump up and go in for more. Nothing can keep the sun in Aries people from getting what they want.

And if someone else needs their help, someone they care about, they will offer this incredible willpower to them too. Their loyalty is unmatched, and they will forge a new era for anyone who wants to join them. Nothing is too difficult for them to overcome. There is always a new dawn, a new day, and a new dream to aspire to.