Astrologically, you are a Libra if your birthday is between September 23rd to October 22nd. The Libra man traits show he is the most perfectly balanced of all the men of the twelve zodiac signs. He will do whatever he can to keep things fair between his friends and family.

The Libra man characteristics show he can also work as a mediator between two fighting parties in order to provide an unbiased solution to the problem. The Libra male only wants to do what is good and right, and he’s not likely to let anyone get in the way of that basic need. 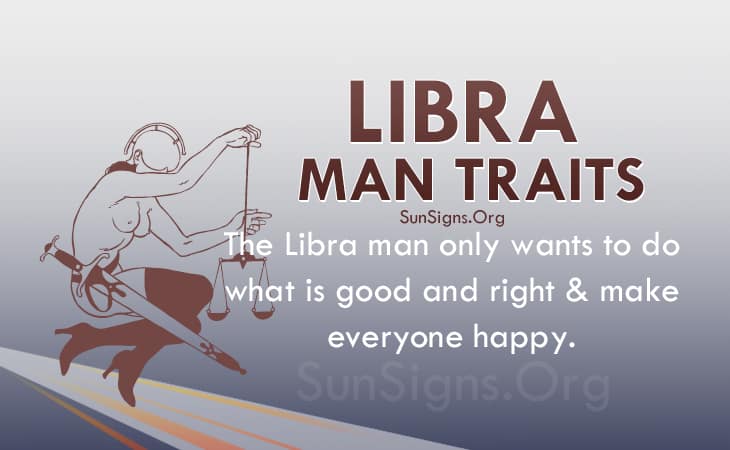 The Libra man personality traits show he does his best to try to make everyone happy. He is a person who believes that it is possible to keep everyone satisfied. The Libra guy will always try to do what he thinks is best for everyone involved. This may not always work, as it is extremely difficult to keep everyone contented, as many people already know.

Libra men don’t want to think of arguments having a winner or a loser. They would much rather aim for every argument to end in a compromise between both of the fighting parties.

The Libra traits show he hates violence, and conflict in general. Some might say that the Libra man is the poster-man for an ideal pacifist. The Libra man will do whatever he can to try to avoid a conflict, and if he cannot avoid it, then he will do what he can to end the conflict as soon as possible.

Because of this, the Libra man personality will do whatever he can to resolve a problem almost as soon as it starts. He can usually end a conflict quickly by making both people equal in his mind, and try to make them see this. If he is involved in the conflict, then he may let the other person get their way just so he can get out of the conflict.

The Libra man characteristics show he is an intellectual, and he likes to communicate with others like him. A Libra man will not want to waste his time talking to someone who doesn’t have anything important or interesting to say.

While the Libra guy does not like conflict, he can find pleasure in friendly debates. He finds that sharing his ideas with others helps to raise his self-confidence levels, as well as his charisma.

If a Libra man does go on date he is more likely to have his partner pick the activity. This can annoy friends and partners. So if you know a Libra man, he would probably rather prefer that you pick an activity.

It’s not that the Libra man doesn’t like to pick things to do, he just feels equally the same way about most activities. So it doesn’t matter to him so much as to which activity is picked in the end.

If a Libra man personality is left to make a decision like this, is will take a little bit of time, as he will want to think about whether everyone involved will like his decision.

The Libra man personality traits show he is one to fall in love easily. As balanced as he tries to be, he can’t help but lean towards love. He will want decisions to be made by himself, as well as his partner.

He wants both members of the relationship to feel equal. In bed, he will want to give his best to his partner, but of course he will want his fair share as well.

Over all, a Libra man is rather generous with his partner in all senses of the word, and once he is in love he will do whatever he can to keep his relationship stable and happy.