You are a Libra if you were born between September 23rd and October 23rd, depending on the year. The Libra woman personality is likely to be kind, generous, and fair whenever she can be.

The Libra zodiac sign is symbolized by the scales, showing that the Libra woman likes to lead a balanced life. She will do whatever she can to keep her life balanced, as well as trying to keep things fair between her friends and family. 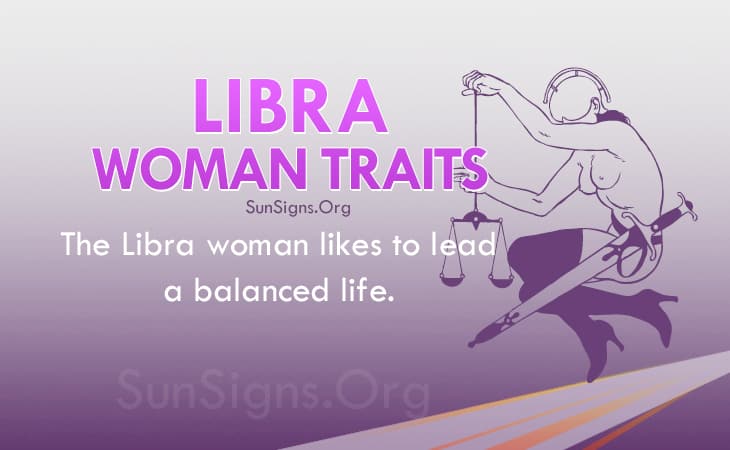 The Libra woman personality traits show that from a young age the Libra girl can tell the difference between what is fair and what is not. For instance, if her sibling is given more of something than she is she will immediately point it out because she realizes that it is not fair.

Many people outgrow this Libran woman trait when they get older. Even if they know that something is not fair they will not say anything about it. However, as a Libra woman gets older her sense of right and wrong and what is fair or unfair only becomes keener.

The Libra woman traits show she likes to lead a peaceful life, and causing drama between friends or coworkers just doesn’t make sense to her, so she will avoid this as well. During her teenage years the Libra female will have an easier time staying out of drama with her friends, and she may instead join a drama club.

Many Libra woman have a flair for creative things, such as the theater and music. The Libra girl is more likely to put her voice to work with singing than yelling at a friend.

The Libra woman characteristics show she wants to make everyone happy. To do this, she tries to keep everything as balanced as possible. She tries not to take sides, but instead takes more of a middle path to most situations.

She does not wish to offend anyone, even if she clearly agrees with one side she will pretend to have no preference to either. This can annoy friends and partners, but it makes the Libra woman feel more secure and like she is doing the right thing.

The Libra woman personality traits show she likes to keep her life balanced. She is likely to keep a schedule to plan out her day. She is more likely to try to balance work and school than to quit one or the other. While she is confident that she can balance out the difficulties in her life, it can sometimes lead to high levels of stress.

She will need help to reduce her stress levels, but she is not likely to ask for help. She thinks that it will make her friends feel better to not know about her troubles. She won’t want to involve her friends in her problems unless it is of great importance.

The Libra woman traits show she might seem a bit detached after being highly anxious or panic stricken. She may want to take a sort of mental break from all of her problems. She is likely to not be very productive during this time. The other zodiac signs may see this as the Libra woman simply being lazy, but her mind is always busy, thinking of what’s right and wrong.

It is a constant mental struggle which can easily wear anyone out over time. Sometimes she just needs a break where there is nothing that can stress her out. This break could last for a couple of hours of productivity to a few weeks. This can interfere with school work as well as working at a job.

She will need a partner that can fully understand her. She is not likely to have sex until she feels completely comfortable with her partner, but once she does it will be great.