How good or bad is the love compatibility between a Libra and Libra emotionally, mentally and sexually? Read on…

When two Libra people get together in a romantic relationship they are likely to have a great time together. Since they are both of the same star sign they are bound to have a lot of traits in common. Similarities are one of the best things that can help to bring zodiac signs together, and since there are not many differences they should be able to stay together for a long time.

Since Libra star sign is usually symbolized with the scales it shows that this couple strives to find a balance within themselves and their relationship, which is an easy task to accomplish. This is a highly romantic sign since Libra is governed by the planet Venus. This Libra-Libra love compatibility seems great, but is it really? Keep reading to find out.

The Libra woman is a kind creature who is born with an innate sense of what is fair and what is not. She won’t stand being treated unfairly, and she won’t stand by while someone else is treated poorly either. The Libra female will stand up for what is true and right.

The Libra woman in love wants to lead a life full of balance. She will try to make friends with the people around her. She is sometimes a social being, so she likes to make friends and hold conversations with other. She likes to speak of creative and intellectual things. She will not be fond of boring and stupid people. The Libra female is most likely to fall for someone who can excite her and pay attention to her. She loves falling in love and since she is social as well it will not be hard for her to find a romantic partner.

The Libra man has many of the same traits as the Libra woman. Like his female counterpart, the Libra male also strives to make this fair and equal for himself and his friends. He is not afraid to break up a heated discussion if he knows that he can help to find a fair solution to the problem at hand. Libra men like to keep themselves happy, as all people do. But they also care very much about other people’s happiness.

The Libra man in love hates conflict and drama, so he is not likely to start any in his own life. This makes him peaceful to be around. He is also great at making new friends and keeping them happy. He loves the feeling of being in love and the sensation  of having sex. The Libra man will want to be with someone much like himself, which will make this Libra-Libra love compatibility a great match. 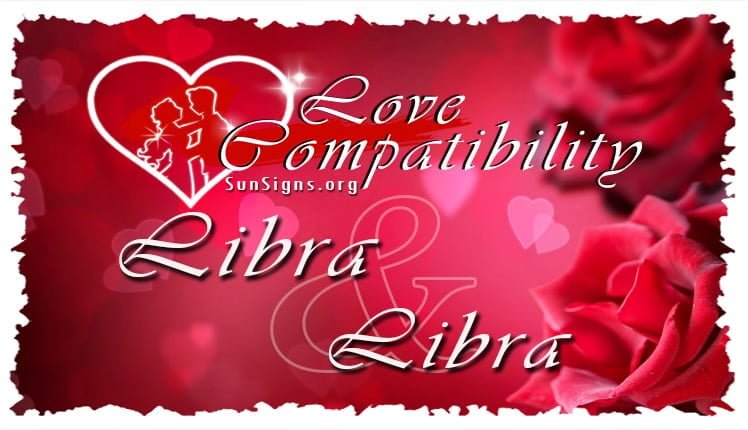 Now that we’ve looked at the traits of the Libra man and woman it is easy to see these two people have a lot in common. Will their similarities be enough to keep these two people together? It seems like it! Here are some pros to a Libra-Libra relationship.

This Libra-Libra soul mates are likely to spend a lot of their time together either in their home or out on dates. They will not have any qualms about going on double dates with their friends, as their dates often take place in social venues anyway. Because these two have so much in common they will have great conversations together. They will always know what excites and entertains each other. It wouldn’t be strange if one member of this Libra-Libra couple was to plan a surprise date for the other.

Libra is a sign that likes to plan things sometimes so that they can be more organized in their life, and sometimes they use this skill to plan things for each other or their friends. This astrological sign like to have a balance in their relationship. So they will both divide decision-making within the relationship equally. This makes for equal and fair treatment within the Libra Libra friendship at all times. They love to challenge each other and getting into friendly debates together.

The longer that the Libra dates another Libra, the more attracted and interested in each other they will be. Once these two people get into a serious relationship or fall in love they will start having sex together. This will be a passionate experience for the two of them. They will try to keep the act balanced between them.

The Libra-Libra sexually will like to take turns having power in the bedroom. Since they love having sex so much, they will be great together. They love pleasuring each other. These two know what they want from each other, and they know exactly how to give it. These Libra-Libra couple are generous in bed, as well as in other aspects of their relationship. Read more about Libra sexuality.

These two also like to surprise each other with planned out dates as well as presents. Libra personality tends to like the finer things in life, so they won’t get upset when one of these spends their money on frivolous things every once in a while. They understand the need to spend money sometimes, and the appreciate the gifts that they get for each other.

While Libra male and Libra female are practically soul mates, all relationships have their own set of problems now and again, and a Libra-Libra relationship is no exception to that rule. It will be the faults in this star sign’s traits that bring problems for this couple. Let’s look at some of the cons of a Libra and Libra marriage.

This zodiac sign’s love for the finer things in life, extra dates, and just failing to save money can easily cause some financial problems in this relationships. One of the most common reasons for divorce in many countries is financially motivated. If this star sign cannot learn to better budget themselves they their financial problems may turn into Libra relationship breakup problems.

The Libra sun sign is often indecisive as well. It can be hard for this couple to make important or even insignificant choices as well.  Because this sign wants to keep things balanced and equal between things and all of their choices they will spend a lot more time trying to make a decision more than some of the other star signs would. Because they spend so much time thinking of an answer they may take too long and end up missing opportunities because of this. If the Libra Libra couple wants to avoid moments passing them up then they need to work on their decision-making skills.

The Libra astrology sign is not the most practical of all of the signs, which can lead to some problems in horoscope compatibility that can be simply solved. This sign gets bored when they are simply at home and don’t have anything to do. Because of this Libra zodiac will not like hanging out the house, and instead they will spend their money going on dates or eating out instead of making meals at home. This can make their lifestyle expensive as the article mentioned already, but it will also mean that their household duties are not being attended to.

It is likely that this couple will be slow to doing chores around the house. They may just rather buy a new shirt instead of doing the laundry. This sign needs to realize that a relationship isn’t all fun and games. They need to learn to take responsibilities at work and in their home.

If the Libra man and Libra woman decide to start a family together, then they need to learn that spending time with their children is just as important, if not more important, than spending time together. These two need to learn to take care of their household and work-related duties first, and then let themselves go on fancy dates once they are sure that they have enough money for it.

In conclusion, a Libra-Libra love compatibility will be great between each other. The problems that they have do not seem to be because of issues with each other, rather than the individual problems with their sun sign. If these people can learn to improve themselves then they shouldn’t have a problem when it comes to keeping an excellent love relationship with each other. Overall, this Libra and Libra relationship is a great one and definitely worth pursuing.