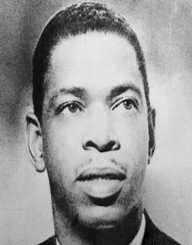 Elmore James was born on January 27, 1918. He was an American guitarist and singer. He was also a band leader. He was popularly referred to as the ‘King of Slide Guitar.’ He had a stirring voice that his audiences loved. He died on May 24, 1963, at the age of forty five.

Elmore James was born Elmore Brooks on January 27, 1918, in Holmes County in Mississippi in the United States of America. He was born to Leola Brooks who was a field hand and Joe Willie James. He was born an illegitimate son, but when Joe moved in with his mother, he was given his surname. When he was twelve years old, he started making music using a one string instrument. He began performing dances for audiences when he was a teenager. He used to perform under the names Joe Willie James and Cleanhead.

In 1942, Elmore James got married to Minnie Mae, but it is speculated that he got married two times again in his lifetime. James’ influences were Tampa Red, Kokomo Arnold, and Robert Johnson. Tampa Red used him to record some of his songs. He later formed the backing band ‘Broomdusters’ with Johnny Jones who was a pianist and Odie Payne who was a drummer.

Later on, James joined the United States Navy during World War II. He was promoted to coxswain and participated in the Guam invasion. He was then discharged and moved back to Mississippi. At Mississippi, he settled down with his brother Robert Holston at Canton and worked in his electrical shop. He was later diagnosed with a severe heart condition.

In 1951, Elmore James began recording with Trumpet Records. He was the sideman for Sonny Boy Williamson II. He was later a sideman for Willie Love. In 1952, he released ‘Dust My Broom’ which was a hit song. He later signed a contract with Bihari Brothers and broke away from Trumpet Records. In 1953, he released ‘I Believe’ which was also a hit. In the 1950s, he recorded for a couple of record companies such as Flair Records, Modern Records, Meteor Records, Chief Records and Chess Records.

In 1954, he played the lead guitar in Joe Turner’s song ‘TV Mama.’ In 1959, he began recording for Fire Records which was owned by Bobby Robinson. The Record Company released hit songs such as ‘My Bleeding Heart,’ ‘The Sky is Crying,’ ‘Stranger Blues,’ ‘Look on Yonder Wall’ and ‘Shake Your Money Maker’ among others. James was considered a unique guitarist with his type of vibe.

Elmore James died on May 24, 1963, in Chicago, Illinois in the United States of America of a heart attack. Before his end, he was scheduled to go on a tour to Europe with the American Folk Blues Festival. James died at the age of forty five. His remains were buried in the Newport Baptist Church Cemetery, Ebenezer in Mississippi in the United States of America. He is popularly remembered for his use of loud amplification while playing the guitar.