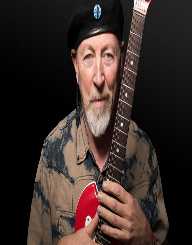 Richard Thompson was born on April 3, 1949, in London, England. His father was Scot Thompson.

Richard Thompson attended William Ellis School. Even while in school, he was obsessed with music. It was while in this secondary studies that he formed his first band: Emil and the Detectives. He played in this band for a short amount of time. Another member of the band was Hugh Cornwell, who also grew up to be a professional musician.

When Richard Thompson was 18, he began playing with a new band: Fairport Convention. This band played folk music on electric instruments, giving the band an interesting and unique sound. The band released its first almost with Thompson called What We Did On Our Holidays. Even though the band was doing fairly well, Thompson left the band in 1971.

In 1972, Richard Thompson released his first solo album: Henry the Human Fly. This album was not highly popular when it was first released. It gained popularity years later once Thompson became more popular.

In 1973, Richard Thompson recorded an album with his wife at the time (Linda Peters) called I Want to See the Bright Lights Tonight. However, this album was not released until 1974. This album was rated highly by critics at the time, but it did not sell well. In 1975, the couple released two more albums: Hokey Pokey and Pour Down Like Silver.

Around 1976, Richard Thompson and his wife joined a Sufi commune. They spent a short time away from playing music professionally during this time. In 1977, Thompson's began getting back into music by playing with other musicians, like Sandy Denny and Julie Covington.

Richard Thompson returned to playing this own music in 1978. It was also in this same year that he produced a new album: First Light. In the next year, he produced another album, Sunnyvista. This later album was not critically praised, but it did sell better than some of his previous albums.

In 1980, Richard Thompson began working on a new album, Shoot Out The Lights. However, his wife was pregnant at the time, so the album was not officially released until 1982. It was also around this time that the couple began touring throughout the United States. Sadly, the couple separated soon after, and quit making music together as well.

In 1983, Richard Thompson recorded a new solo album: Hand of Kindness. In this year and the next, he continued to tour the United States and in parts of Europe. Richard Thompson performed his solo songs, but with a touring band. Some of the shows that he played at in the early 1980’s were later released on the live album Small Town Romance in 1985. In the same year, he also produced a studio album called Across a Crowded Room.

In 1986, he produced another new album called Daring Adventures. His next album came out in 1988 and was called Amnesia.

In the early 1990’s, Richard Thompson went back and forth between producing solo albums and working with some other famous musicians. Some of his albums from this decade are Rumor and Sigh, Mirror Blue, and Mock Turner. Some of the musical artists he performed with were Willie Nelson and David Bowie.

Throughout the 2000’s, Richard Thompson has continued to release new albums. Some of his albums from this time include The Old Kit Bag, Front Parlour Ballads, and Sweet Warrior. In the 2010’s, Thompson has been focusing on touring and performing with other artists. Some of the albums he has played on most recently are Dream Attic, Electric, Won’t Be Long Now, and Family.

All of Thompson's awards and accomplishments are due to his musical career. Some of his most prestigious awards are listed below.

Richard Thompson is an Officer of the Order of the British Empire as of 2011. He has an honorary doctorate degree from the University of Aberdeen.

Richard Thompson married Linda Peters in 1972. The couple had one child together: Teddy Thompson. Sadly, the couple separated in 1981. Thompson later remarried to a woman named Nancy Covey in 1985.