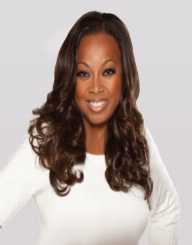 Star Jones is an American TV personality and lawyer born on March 24th, 1962. She is also a journalist, fashion designer, and author. From 1997 till 2006, she co-hosted the famous show The View. Also, she has worked in Jones & Jury show as its host. As an attorney, she has been a legal correspondent at NBC.

Star Jones has a degree from both University of Houston Law Center and American University. She took part in the reality series, Celebrity Apprentice as a competitor. Jones has appeared four years consecutively in the PETA’s "worst dressed" list. Furthermore, she has also faced many other controversies in her life.

Star Jones was born on March 24th, 1962. Her place of birth was in Badin, North Carolina in the United States. However, she was brought up in Trenton, New Jersey by her stepfather and her mother. Her stepfather was a municipal security chief. Her mother, on the other hand, served as a human services administrator.

Star Jones attended Notre Dame High School, Lawrenceville, New Jersey and graduated from there. She later joined American University where she attained a B.A Administration of Justice degree. She also attained another J.D degree in 1986 after her studies at the Center. The following year, she attained an admission at the New York state bar.

In 1986, Star Jones served as a prosecutor with Office of Kings County District Attorney in Brooklyn, New York. She worked at the position till 1991. The following year, she received a promotion to be the senior assistant district attorney. Meanwhile, in 1991, she also worked for Court TV as William Kennedy Smith’s commentator during the rape trial. Jones has also worked for NBC Nightly News and NBC's Today as a legal correspondent.

In 1997, she became of the first hosts of The View. Star Jones was later dismissed from the show. However, in 2012, she returned to the show as a guest. Since then, she has made many guest appearances.

Star Jones was E! television network’s red-carpet host in September 2004. However, her contract expired a year later and E! did not agree to renew it.

Besides her TV hosting career, Star Jones has also taken a role in acting. She acted the role of Star Jones Law & Order: Special Victims Unit in its eighth-season finale. In 2012, she also acted in Drop Dead Diva as a judge. She often makes guest appearances on The Wendy Williams Show. She is currently the producer of Daytime Divas TV series and has made guest appearances in some episodes.

Star Jones authored a group of autobiographical essays titled You Have to Stand for Something, or You'll Fall for Anything. It was published in 1998. She later penned down another book Shine: A Physical, Emotional, and Spiritual Journey to Finding Love published in 2006. Her 3rd book was released in 2011 with the title Satan's Sisters, a roman à clef.

In 2004, Star Jones wedded Al Reynolds, an investment banker but divorced in 2008.