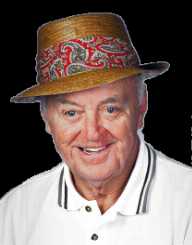 Sam Snead was born 27th May 1912, to Harry and Laura Snead. He was born in Virginia, the United States, not far from Hot Springs. He was one of five children, living on a farm as a young boy.

When he was 19, Sam Snead was working at The Homestead in an Assistant Pro role. At 22, he turned professional. Snead joined the PGA Tour in 1936.

During his first season on the PGA Tour, Snead won two tournaments, which came with a $10,000 prize. These funds gave Snead the momentum he needed to start playing on a professional basis full-time.

1937 was Snead’s first full year on the PGA Tour. He won five events. Snead continued on over 1938 and 1939, playing professionally on the Tour.

He became Head Pro at The Greenbrier Resort in 1944. The Resort was based in WhiteSulphur Springs, West Virginia.

Sam Snead ventured into television in 1960, hosting the program, Celebrity Golf, in which he would compete against celebrities like Dean Martin, Jerry Lewis, and Bob Hope for charity.

He wrote several books about golf, and often wrote columns in golf magazines, giving tutorials and tips for the readers. In 1962 Snead released his autobiography, The Education of a Golfer.

Sam Snead turned professional in 1931 and retired in 1987. Over the 56 years he played as a professional,  Sam Snead won a phenomenal 165 tournament wins.

Sam Snead held many records and received many honors and awards for his outstanding career. From 1984 through to 2002, Snead performed the honorary tee-off at The Masters.

Sam Snead won the Vardon Trophy four times between 1939 and 1955. He was the PGA Player of the Year in 1949, and also honored in 1998 with the PGA Tour Lifetime Achievement Award.

Sam Snead married Audrey Karnes in 1940. They were married until Karnes’ death in 1990. The couple had two children, Sam Jr., and Terrence.