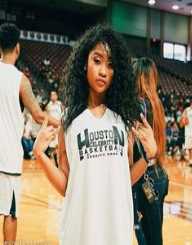 Lyric MichellRagston was born on July 30, 2000, in Houston, Texas. She is sixteen years old. She is a rapper, singer, and a social media personality. She has more than thirty five million views on YouTube. Her father and uncle are both musicians. She started singing while she was still very young. She is among the many young rappers who have impressed many people by the talent that they possess. Lyric also loves dancing apart from singing and rapping. Her first performance was while she was in school and she was only seven years old. She became known to people when she posted the video ‘Pink and Purple’ on YouTube. Her video received so many views, and since then she has never looked back.

Lyric surprisingly started her career. She used to write and compose raps and songs as a hobby and not anything more than a hobby. One day she decided to shoot a webcam video with her friends. The video was of a remix she had made to Young Jeezy’s ‘Lose My Mind.’ She later posted the video on YouTube to share with her classmates, but the video went viral. The video was reposted in WorldstarHipHop. The success of the one video drove her to create more videos and post them online for people to see. She received so many views as people were attracted to her talent. Her videos caught the attention of music labels, managers, agents and radio stations among other prominent platforms. Her music is a mix of Hip Hop, RnB, Rock, and Pop.

She gets her inspiration from Beyonce and Nicki Minaj. She has released singles such as ‘Young & Fly,’ ‘Youngest in the Game,’ ‘Just Keep Rockin’ and ‘#2Fresh2Fly’. Lyric also has mix tapes that include ‘Scribbled on Em’ and ‘Back 2 School Volumes 1 and 2’ among others. In 2013, she released a remix of ‘No Worries’ which is Lil Wayne’s song. In 2015, she released two albums titled ‘Princess’ and ‘H.G.I.C.’ She has remixed songs by Wiz Khalifa, Kanye West, and Drake.

She has been featured on shows such as CNN Entertainment, BuzzFeed, Billboard.com, Fox News and PopDust among others. She is talented and hardworking and determined to have a great career in music. Lyric is highly supported by her parents and her fans who love her so much. Her popularity grows every day due to the nature of her videos that draw people to her. She is energetic and full of life.

Lyric is a recipient of the Female Hip Hop Grind Award which she received at the 3rd Annual Female Hip Hop Honors, Los Angeles. WorldStarHipHop.com viewers and her Twitter Followers labelled her the Best 14-year-old Rapper Alive in 2014. She participated in the show ‘The Rap Game’ which was produced by Queen Latifah.

She attends school and loves spending time with her family and friends. Lyric also attends dance classes and singing lessons. She is also a cheerleader in her school.