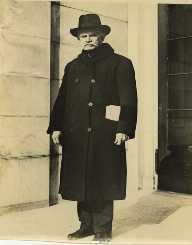 John Davis Long was born on October 27, 1838, in Buckfield, Maine. He attended school at the Hebron Academy and afterward went to study Law at the Harvard University. He graduated in 1857. During his time in Harvard, Long wrote prose for the student magazine and his graduation wrote an ode.

After graduating, John Davis Long went to work as the headmaster of Westford Academy in Massachusetts. He passed the Massachusetts bar in 1861 and began practicing law in Buckfield and Boston. During the American Civil War, he was active in the state militia. In 1869, Long moved to Hingham, Massachusetts and married Mary Woodford Glover.

In 1870, John Davis Long started his involvement in politics in the local Hingham government. In 1871, he was nominated for a seat in the Massachusetts House of Representatives. Although the Democratic party supported him, he did not campaign and lost the election. In 1874, he became the chair of the state Republican convention and won election to the state legislature. His first major step in politics was the 1878 election for the governorship, but he lost the race to governor Rice. A year later, Rice retired from the position and won the election. His time as the governor was relatively uneventful.

In 1882, John Davis Long was elected to the United States Congress, where he served until 1889. During his tenure in the Congress, it was under the Democratic Party control. Long lobbied the administration for patronage appointments and set on a committee examining shipbuilding and ship owner interests. He also dealt with the Navy pension financing. After the death of his first wife in 1882, Long remarried in 1886 to Agnes Pierce. In 1888, John Davis Long declined to run for a second term in the Congress and spent the next eight years in his private practice. He continued to be active in the Republican party.


Secretary Of The Navy

During his time in the Congress, John Davis Long had made friends with William McKinley, who won the presidential election in 1896. Long was offered to choose from several cabinet posts, and he chose to become the Secretary of the Navy. Long helped to secure the position of Assistant Secretary for Theodore Roosevelt. Long believed that the tensions with Spain were unlikely to lead to a war and did not take action in preparing the Navy for that possibility. When the tensions reached a point of crisis in 1898, Long began drawing plans for war. After a ship he sent to Havana, Cuba was sunk, the Spanish-American War was ignited.

The administration realized that there is a major shortage of modern warships. After the war was declared in April 1898, Roosevelt resigned from his post. During the war, John Davis Long increased the Navy’s size and directed all the activities. When the war ended, Long created the advisory staff which was designed to unify the work of the Office of Naval Intelligence, the Naval War College and the fleet leadership. Long also pushed forward plans to establish a base in the Philippines, but his plans were held back by the Congress. In 1900, Long was seen as the potential vice president for the Republican National Convention, however, due to objections of the party, McKinley chose Roosevelt as his running mate.

In 1901, President McKinley was assassinated, and when Roosevelt became the President, John Davis Long resigned from his post. He came to this decision due to Roosevelt’s close relationship with his rival Henry Cabot Lodge and criticism he received about his role in the war. Also, Long’s daughter had recently died, and he was suffering from depression.

After leaving the office, John Davis Long returned to Massachusetts and worked in his law practice. He continued to be interested in party politics and served as the president of the Puritan Trust Company. He was an advocate for women’s suffrage and served on boards of several schools. John Davis Long died on August 28, 1915.