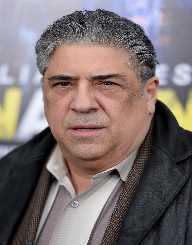 Vincent Pastore is the most noticeable American actor in all the mafia television series. His role in the crime series Sopranos made him a household name in the US. His stout physique and New York upbringing made him play out as a natural street person.

On July 14, 1946, Vincent Pastore was born in Bronx, New York. He moved with parents to New Rochelle in New York. He graduated from high school but deferred going to college.

He enlisted himself into the military. After serving in the US Navy, he went into acting. Pastore is an alumnus of The Pace University in New York with a degree in drama. Like most Italian Americans, he took up the family restaurant and nightclub business. He ran his hotel and nightclub businesses for over 30 years.

Unlike most actors, Vincent Pastore went into acting like an adult. He got his first acting role at the age of 42. This came in 1988 in a role in the movie Black Roses. He went on to star in supporting roles in other films. Goodfellas, Carlitos, and Awakenings which was done in 1990 are some of them.

After several casts, Pastore got a bigger cast in the screen production The Jerky Boys. This crime comedy was produced in 1995. The following year, he got another role in the movie Gotti. In 1997, he played a role in The Last Don. Another crime cast Witness to the Mob was done in 1988.

His most famous cast came with The Sopranos. In 1999, he played the role of Salvatore Bonpensiero. His deep voice and heavy Italian accent gave this role an accurate Mafioso picture. In this series, Pastore or Bonpensiero is a criminal who helps the federal police against the mafia. The Sopranos had viewers glued to their television sets for two seasons.

After the two successful series of The Sopranos, Pastore went on to other screen films. From 1999 to 2013 he appeared in over 30 films. He also helped in the production of several other films. One of them is Everyone Hates Chris. This was a predominantly an African American comedy production.

In the radio world, Pastore has done his share of production. He hosts a weekly show The Wise Guy, on Sirius Satelite Radio in New York. In the show, Pastore highlights and promote the Italian culture to the listeners.

The Best Supporting Actor award went to Vincent Pastore. This was from the film “Surviving Family,” the award was presented to him in the year 2013 on 13th of September.

April 5th, 2016, Vincent receives the Celebrity of The Year 2016; the award was presented by the Boys and Girls Town of Italy in New York City. Vincent was inducted into the Bronx Walk of Fame in May 2016; he has a street sign on the corner of East 116st Street and at the Grand Concourse in The Bronx. In October the year 2016, Vincent was named the ‘’Man of the year 2017’’.

Vincent Pastore received the New York Spirit Award in the year 2017 as a result of his great output in the participation of the Film Kids Menu.

Vincent Pastore has a daughter from his previous marriage. He is divorced from his wife, Nancy. Currently, he is not married. He was arrested in 2005 and charged with assaulting his girlfriend. Pastore pleaded guilty and was sentenced to community service.

He was never an athletic person from childhood. Despite that, he is a die-hard New York Yankee fan.

At the age of 72, Vincent Pastore is still active in the film industry. He is synonymous with the mafia bosses. He is a living story that one can discover his talent way into adulthood. Despite starting his career in his 40s, he has over 30 film casts in his belt.

Vincent Pastore is also involved with charity organizations. He donated money to Mitchell Burke in memory of the late husband. Pastore also gave money to the future husband of his ex-wife Nancy. He is currently residing in City Island in New York.