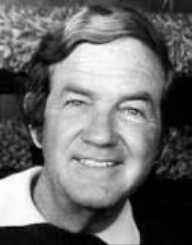 Author and playwright Jerome Lawrence was born in Cleveland, Ohio on the 14 July 1915 to Samuel Lawrence and Sarah Rogen. His father owned a printing business, and his mother was a poet.

Jerome Lawrence graduated from Glenville High School (1933) and then studied at Ohio State University (1937) and the University of California in Los Angeles (1939).

Jerome Lawrence started out working for newspapers in Ohio including the Wilmington News Journal, as a reporter and telegraph editor. In California, he worked as a continuity announcer on KMPC in Beverly Hills. He then worked as a senior staff writer for CBS Radio.

During World War II (1939-1945), Jerome Lawrence worked as an assistant in the department of the Secretary of War. He was then sent to North Africa and Italy as an Army war correspondent. He met Robert E. Lee, and together they set up the Armed Forces Radio, America’s official radio for D-Day, VE-Day, and VH-Day.

Back home after the wear, Jerome Lawrence and Lee wrote radio plays, and in 1948, their first theatrical work was staged in New York City: Look, Ma, I’m Dancin! They continued working together and produced Annie Laurie: A Story of Robert Burns (1954) and Inherit the Wind (1955). Inherit the Wind concerned what became known as the monkey trial when a young, Tennessee teacher, John Thomas Scopes, was accused of teaching Darwin’s theory of evolution in violation of a Tennessee state law. Inherit the Wind won four Tony award nominations.

In 1958, they adapted Patrick Denni’s novel Auntie Mame into the Broadway musical Mame. Mame was later filmed (1974) with Lucille Ball in the title role. Lawrence and Lee went on to collaborate on almost 40 plays including The Night Thoreau Spent in Jail (1970), Jackwerwock (1972), First Monday in October and Whisper in the Mind (1990).

After Lee died in 1994, Jerome Lawrence continued writing as well as being involved in productions of their plays. Lawrence’s work included hundreds of plays for television and radio, cinema and stage. Lee and Lawrence were the founders of the American Playwright’s Theatre. Lawrence also lectured at the University of Southern California where he gave classes in professional writing.

Jerome Lawrence won a Tony Award nomination for Best Book of a Musical for Mame. In 1986, The Jerome Lawrance and Robert E. Lee Theatre Research Institute at Ohio University was named in their honour.

Will Willoughby was Lawrence’s partner. Jerome Lawrence died on the 29 February 2004 in Malibu, California.