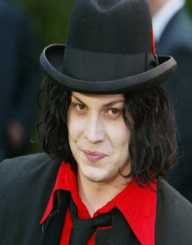 John Anthony Gillis was born on the 9th July 1974 in Detroit, Michigan and later became famous as the musician Jack White. White came from a large family; his parents were Gorman and Teresa Gillis. He was brought up in the Roman Catholic faith and used to serve as an altar boy in his local parish. He started showing an interest in music at a young age and soon became a multi-instrumentalist.

Jack White did his high schooling at Cass Technical High School in Detroit, after which he took up an upholstery apprenticeship.

His first professional job as a musician was with Goober & the Peas, and he played the drums until they disbanded in 1996. Jack White did his apprenticeship but continued playing with various local bands and doing gigs on his own. He had met Meg White during his high school year, and in 1996 they got married. It was then that he adopted his wife’s surname. After their marriage, Meg taught herself to play the drums, and the couple formed a duo, calling themselves The White Stripes. White finished his apprenticeship and opened his own business, Third Man Upholstery.

The duo began appearing around Michigan in the underground, alternative rock scene and in 1998 they were signed up by Italy Records. Their first album was entitled The White Stripes and was followed up by De Stijl. Their third album, White Blood Cells was a financial and critical success. The song Fell in Love with a Girl became popular. Their fourth album Elephant was also successful. The single, Seven Nation Army was a number one hit on the Billboard Modern Rock Tracks chart and won a Grammy Award for  Best Rock Song in 2004. Their fifth album, Get Behind Me Satan, won a second Grammy.

When Icky Thump was released in 2007, they won a third Best Alternative Album Grammy Award. Icky Thump was The White Stripes last album.  After the release of the album, which debuted at number two on the US Billboard 200 chart and number one in the UK Albums Chart, the White Stripes did an extensive tour of Canada. The touring had to stop when  Meg’s issues with anxiety became a problem. In February 2009, their first appearance since the cancellation, they appeared on Late Night with Conan O’Brien, this turned out to be their last appearance. In February 2011, The White Stripes officially disbanded.

Jack White then formed a band called the Raconteurs. He had been collaborating casually with Brendan Benson in the mid-2000s, and they decided to join forces with Jack Lawrence and Patrick Keeler. They released Broken Boy Soldiers in 2006, and it was an immediate success in the United States and the UK. The band won two Grammy nominations. A follow-up album Consolers of the Lonely was released in 2008, and they went on tour to promote it.

White started another band, The Dead Weather with Alison Mosshart, Dean Fertita, and Jack Lawrence. The first album Horehound came out in 2009, and they recorded Sea of Coward in 2010.

Soundtracks that White has been involved with include: Cold Mountain (2003) three songs including Never Far Away;  Shine a Light (2008) for Loving Cup with the Rolling Stones: The Great Gatsby (2013), Love is Blindness and The Hateful Eight (2015), Apple Blossom.

On film, Jack White has made a number of appearances including playing Elvis Presley in Walk Hard. He was also in The Dewey Cox Story (2007); appearances as himself on Coffee and Cigarettes (2003).  Under Blackpool Lights (2004).Under Great White Northern Lights (2010), Conan O’Brien Can’t Stop (2011) and American Pickers (2012)

In 2011 Jack White was presented with the title of Nashville Music City Ambassador. During 2015 White won two Grammy Awards one for Lazaretto for Best Rock Performance and another for The Rise and Fall of Paramount Records 1917-1927, Vol.1. Rolling Stone has ranked White as number seventy on their 100 Greatest Guitarists of All Time list.

Jack White was married to Meg White from 1996 until 2000. They led people to believe that they were brother and sister. In 2003, White met Renee Zellweger, and they were a couple until late December 2004. He then married model Karen Elson in June 2005. The couple had two children before separating in 2011 and divorcing in 2013.

White was born into a Roman Catholic family and used to be an altar boy in his youth. At one stage he contemplated becoming a priest.

Jack White is on the board of The National Recording Preservation Foundation and has donated to the organisation. He is also on the Gender Equality Council in Tennessee.

White has a reputation with anger including disputes with other artists. In 2003 he was fined for assault and battery. He was also instructed to do a programme in anger management.

During the 2016 election campaign, he came out as anti-Trump and sold t-shirts with the slogan Icky Trump.