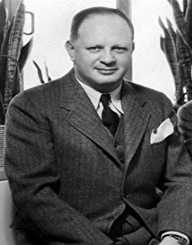 Herman Jacob Mankiewicz was an American screenwriter, playwright, and journalist.

Herman Jacob Mankiewicz was born on November 7, 1897, in New York City. His father, Frank Mankiewicz, was a teacher. His mother, Johanna Blumenau, was a seamstress. They were German Jewish immigrants who emigrated from Hamburg. He had a younger brother, Joseph, who became a director and producer. He also had a younger sister, named Erna. When he was little, his family moved to the city of Wilkes-Barre, Pennsylvania.

Mankiewicz studied philosophy at Columbia University. He obtained his bachelor’s degree in 1917.

From 1920 to 1922, Mankiewicz lived in Berlin. There, he worked as a correspondent for the Chicago Tribune. He also wrote think-pieces on books and plays for The New York Times. He then returned to the U. S. and became a reporter for the New York World. He wrote for magazines such as The Saturday Evening Post and Vanity Fair. In 1925, he became a theatre critic for The New Yorker. He collaborated with several playwrights on plays such as The Wild Man of Borneo and The Good Fellow.

Mankiewicz managed to capture the attention of film producer Walter Wanger. He soon moved to Hollywood to pursue a career in screenwriting. He started working at Paramount Pictures. He initially wrote titles for silent films. He later moved on to writing lines for sound films. He quickly achieved great success. He became the head of the studio’s scenario department. He revolutionized the industry by bringing a new form of humor and satire. He later started working for Metro-Goldwyn-Mayer Studios.

Mankiewicz worked on dozens of scripts. His work included films such as The Wizard of Oz, Pride of the Yankees, Gentlemen Prefer Blondes, Dinner at Eight, and many others. His contributions to several films remained uncredited.

In 1941, Mankiewicz worked on the screenplay for the mystery drama Citizen Kane. He co-wrote it together with Orson Welles. The two of them eventually started fighting about their individual contributions to the film. They went on to win an Academy Award for Best Original Screenplay. However, Mankiewicz refused to attend the ceremony.

During World War II, German officials refused to show the films Mankiewicz worked on. The reason for this was his Jewish last name. They told the studio they would only show them if his name was removed from the credits.

Mankiewicz struggled with alcoholism. He died of uremic poisoning at Cedars-Sinai Hospital on March 5, 1953. He was 55 years old.

The film RKO 281 was released in 1999. It depicted the problems behind the production of Citizen Kane. Actor John Malkovich portrayed Mankiewicz.