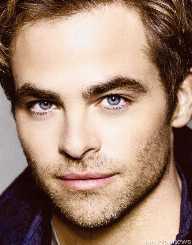 Chris Pine is an outstanding award-winning American Actor known for his role as Captain James. Kirk in a series titled, ‘Star Trek.' Other notable films include, ‘Unstoppable,' ‘Hell or High Water’ and ‘Wonder Woman.'

Chris Pine is the second born to parents Robert Pine and Gwynne Gilford born on August 26, 1980, in Los Angeles. His father is a performing actor while his mother is a psychotherapist and a former actress. Pine attended the University of California where he graduated in 2002 with a bachelor of arts in English.

He then enrolled at the University of Leeds for a year where he studied exchange. After his graduation, he attended the Williamstown in San Francisco at the American Conservatory Theatre.

Chris Pine made his first career performance in 2003, in an episode of ‘The Guardian’ and ‘CSI: Miami.' The following year, he appeared in ‘Why Germany?’ and ‘The Princess Diaries 2: Royal Engagement’ where he played the role of Nicholas Devereaux. In 2005, he appeared in the series, ‘Six Feet Under,' ‘Confession’ and ‘The Bulls.'

He also played in a television film titled, ‘Surrender, Dorothy’ which aired in 2006. The same year, he starred in ‘Just My Luck’ alongside Lindsay Lohan and appeared in a comedy ‘Blind dating,' an action film, ‘Smoking’ Aces’ and a one-man play ‘ The Atheist’ in New York.

In 2007, Chris Pine starred in ‘Fat Pig’ alongside Scott Wolf, a performance with garnered positive reviews. Later in 2008, he played the role of Bo Barrett in the film ‘Bottle Shock.’

Progressively, in May 2009, he characterized James T. Kirk in ‘Star Trek’ film that received positive remarks. He appeared briefly in the movie, ‘Saturday Night Live’ which he co-starred with Zachary Quinto and Leonard Nimoy. During the summer of that year, he played in the film, ‘Farragut North,' a Los Angeles production.

Later, during the fall season, he directed the film, ‘Unstoppable’ released in November 2010. During the summer of 2010, Pine made a remarkable performance in ‘The Lieutenant of Inshore’ that earned him a Drama Critics Award in Los Angeles.

Additionally, Chris Pine played in the documentary ‘The Captains’ written and directed by William Shatner and filmed ‘This Means War’ a romantic comedy which featured Reeses Witherspoon and Tom Hardy. The film had its release in February 2012. The same period, Pine voiced Jack Frost in an animated film titled, ‘Rise of Guardians’ and also co-starred with Elizabeth Banks, Michelle Pfeiffer and Olivia Wilde in ‘People Like Us’ a family drama released in 2012.

Following the continuation of the film ‘Star Trek.’ of 2009, Pine reprised his role as Captain Kirk in May 2013 and played the role of a CIA analyst Jack Ryan in the play of Tom Clancy’s novel.

Chris Pine starred in the film, ‘Shadow Recruit’ released in 2014, followed by another leading role in ‘The Finest Hours’ and ‘Netflix’s Wet Hot American Summer: First Day of Camp. He also voiced ‘SuerMansion’ in 2015 and played alongside Ben Foster in ‘Hell or High Water’ filmed in Mexico on May 26, 2016. This movie had its first performance at 69th Annual Cannes Film Festival and followed by its release in August 2016.

Filming of ‘Star Trek Beyond’ started in June 2015 with Pine resuming his role as Captain Kirk and was aired on July 22, 2016. Later in 2017, he continued his role in the second season of ‘SuperMansion’ and ‘Wet Hot American Summer; Ten Years Later.'

Also, Chris Pine made a guest appearance in season three of ‘Angie Tribeca’ and narrated the second season of National Geographic Channel’s ‘Breakthrough.' The same period, he starred in a superhero film titled, ‘Wonder woman ‘released in June, followed by the movie, ‘Outlaw King’ and the six episode of a television drama, ‘One Day She’ll Darken.' In 2018, he is scheduled to play in the film ‘A Wrinkle in Time’ based on a novel of the same name.

On March 2014, Chris Pine had his first arrest for failing an alcohol test. He was fined NZ $93 and banned from driving in New Zealand for six months.