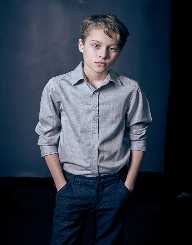 Shane Blanchard is an American actor, singer, dancer, and performer from Los Angeles, California. He is the younger sibling of Rowan Blanchard, the costar on the hit Disney televisions show Girl Meets World. Shane has been performing since he was a little kid. He has become a darling in the eyes of many Americans due to innocent looks and amazing abilities in acting, singing, and dancing. Shane is mainly famous for his family’s role and activity inside of show business.

On January 31, 2006, Shane Blanchard was born in Los Angeles, California. He is the son of Mark Blanchard-Boulbol and Elizabeth Blanchard. Both of his parents are yoga instructors. Surprisingly, they have a strong interest in show business. Shane’s older sisters started acting and performing together at a very young age. Rowan started acting when she was five-years-old. She went on to play a huge role in movies like The Back-Up Plan, Spy Kids: All the Time in the World in 4D, and Invisible Sister. Shane was only four-years-old when his sister was in The Back Up Plan. His sister is better known for her role in the hit television show Girl Meets World, where she costars with Sabrina Carpenter.

Shane Blanchard has a diverse background with ethnicity. His grandfather was an immigrant from the middle east. He fled due to the persecution of local Christians inside of his home country at the time. Therefore, he fled to the United States for a better life. He has Lebanese, Moroccan, Armenian, and Syrian ancestry through his grandfather. Not only that, but he also is Swedish, Danish, Norwegian, and English through his grandmother. Shane’s mom is from Portuguese, German, and English ancestry. This gives Shane a diversity of cultures to work with and express. The Blanchard family members are very proud of their heritage.

Shane Blanchard also has an older sister named Carmen. She is two-years older than him. Rowan is four-years older than Shane. Carmen used to dance and perform with Rowan. The family has also acted together in a few movies.

A lot of Shane’s rise to popularity was due to his parents and his family. Shane Blanchard was very interested in singing and dancing as a very little kid. He might have been inspired by his older sisters’ roles. Seeing that their son enjoyed singing and dancing, Shane’s parents encouraged him to pursue a career as an artist in show business. His parents gave him everything he needed to hone his talents and grow into an extremely talented singer and dancer at an extremely young age.

Shane Blanchard performed at a lot of local events to start gaining popularity. However, it was not until he performed with Rowan and Carmen that his career started to take off. Due to their rising popularity, Shane was able to add a new part to their act.

Shane Blanchard rose to stardom inside of the 2015 feature Candy where he played Spencer. Although he only appeared in the clip for a short amount of time, the world fell in love with him due to his acting ability, talent, and innocence. The video became extremely popular on social media networks such as Facebook and Twitter. He went on to make an even bigger name for himself in the 2015 release of A World Away. The movie is about six children who take a trip to the Grand Canyon. However, they end up in a fantasy world. The movie was mainly targeted at children and young teenagers.

Shane Blanchard was praised for his role as Frankie. Both of the movies were released online and became hits. Shane Blanchard acted with his two siblings in both movies and added a different sense to the movies due to his age. A 2017 release of A World Away is coming out. Shane is once again playing Frankie.

Not only did he play an important role in the movies, but he also won over the hearts of people across America. Shane impressed people with his acting skills. Shane Blanchard also made an impact with his singing, dancing, and adorableness. Many children around the United States started to pay attention to Shane Blanchard. Although he still lives in the shadow of his older sister, Shane has gathered a huge following. A lot of people in Hollywood believe that Shane has a bright future with acting. The critics also praised him for his abilities. They praised him for his performance and also predicted a great future for him inside of acting.

The movie was also directed by Shane’s father, Mark Blanchard-Boulbol. The movie was a huge commercial success, which brought even more light on to Shane’s bright future.

Shane Blanchard is very popular due to the fact that he has several skills in singing, dancing, and acting. He has almost mastered a lot of these, and it is paying dividends inside of his early career. He also is a very charming, innocent boy from California. This has made him a darling for children across America.

Charity Interests and the Lack of Controversy

Shane’s sister Rowan has become involved in several different protests and movements. She is very heavily involved with women’s rights and feminism. She also is an activist that stands up against gun violence. Finally, she works a lot with human rights for people around the world. Shane has participated in a lot of these events with his sister. Being seen as an activist has also helped grow his popularity as a young star. It shows a sense of maturity and duty to support others. Also, since Shane was seen with his sister, who is now a superstar due to her role in Girl Meets World, he has rose to stardom with her.

Shane Blanchard has also done a great job of staying away from controversy. Problems have plagued former child stars such as Miley Cyrus, Mary Kate and Ashley Olson, Lindsey Lohan, and several other child hood stars. Shane has done a great job of avoiding controversies in his career so far. His interests in charity has helped with this. By helping out charities, Shane has been able to avoid the negative parts of show business. He has also been very active with the promotion of socially responsible activities. If Shane continues on this path, he should have a bright future ahead of him.

Only time will tell what Shane Blanchard’s legacy will be. As an eleven-year-old actor, there is a lot of careers left for him. If Shane Blanchard is able to stay out of controversies and other problems that have plagued former child actors, like alcohol and substance abuse, then he could go down as one of the best child actors of all time.

However, he has not acted a whole lot yet. He has a lot of potentials, but it will take time to see if he will reach that max potential. Shane could make a name for himself. Otherwise, he will go down as the adorable younger brother of Rowan Blanchard.

His connections to Disney though and amazing talent could launch a solid career in the industry. In sports terms, Shane is like a first-round draft pick. He has the potential and talent to perform right away. It will just take time to see if this will turn into a walk of fame career.