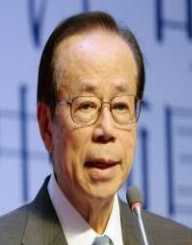 Yasuo Fukuda is a Japanese politician and former prime minister.

Yasuo Fukuda was born on July 16, 1936, in the city of Takasaki, Gunma, Japan. His father was the politician and prime minister Takeo Fukuda. His mother was Mie Arai Fukuda. He had four younger siblings, including a sister named Reiko. He spent most of his childhood in the ward of Setagaya in Tokyo.

Yasuo Fukuda studied at Azabu High School, a private prep school. He then attended Waseda University, earning a degree in economics in 1959.

After graduating, Yasuo Fukuda joined the company Maruzen Petroleum. From 1962 to 1964, the company sent him to work in the United States. After returning to Japan, he managed to work his way up to section chief. When his father became prime minister, he quit his job and started working as a political secretary. He held that position from 1976 to 1978. After that, he became the chairman of the Kinzai Institute for Financial Affairs. At the same time, he became the head of the Japanese Canoe Federation.

In 1989, he left the Kinzai Institute and went back to politics. The following year, he won a seat in the Japanese House of Representatives. In 1997, he became deputy director of the Liberal Democratic Party of Japan. In 2000, he joined the staff of Prime Minister Yoshiro Mori as Chief Cabinet Secretary. In 2004, he became involved in a scandal with the country’s pension system, so he resigned from his position.

In September 2007, Yasuo Fukuda took part in the elections for Prime Minister of Japan and leader of the Liberal Democratic Party. He received support from ministers and representatives. He managed to win, defeating his opponent Taro Aso. In June 2008, the upper house of the parliament passed a censure motion against him. They criticized his decisions, such as the new medical plan he had developed. Soon after that, the lower house of the parliament passed a motion of confidence. In July 2008, he took part in the 34th G8 Summit. In September 2008, he called an emergency press conference and announced his resignation.

Yasuo Fukuda kept doing occasional work in politics. In 2014, he served as a negotiator between the governments of China and Japan. He went to Beijing to secretly meet Chinese government officials, arranging the meeting between Chinese President Xi Jinping and Japanese Prime Minister Shinzo Abe. He managed to set up the basis for the November 2014 China-Japan summit.

In 1966, Yasuo Fukuda married a psychologist named Kiyoko. They had a son named Tatsuo, who also became a politician.