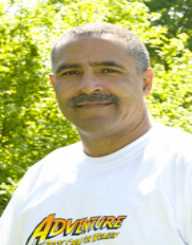 Daley Thompson was born in Notting Hill, London, England on the 30 July 1958. Thompson’s mother was Scottish. His father, who was Nigerian, worked as a taxi driver. He was shot and killed when Thompson was a preteen.

As a child, Daley Thompson was a pupil at Farney Close Boarding School in Sussex.

Daley Thompson was initially interested in becoming a footballer but later joined the Newham and Essex Beagles Athletics Club. He was in keen on sprinting, but coach Bob Mortimer recognized his potential and guided him to become a decathlete. At age 16, Thompson won a competition in Wales and set a British junior record for the event.

In 1975, Daley Thompson was selected for the British Olympic Team to participate in the Summer Olympics in Montreal Canada (1976). The seventeen-year-old finished number eighteen in Montreal. He took part in the European championships in 1978 and came second. Thompson won gold at the Moscow Olympics; earlier he had set a world record of 8.622 points.(May 1980) His form continued when he set world records in both 1982 and 1983. The Los Angeles Olympics of 1984 saw him defend his title and join Bob Mathias as the only other Olympian to have won two consecutive decathlon gold medals. (Mathias achieved this in 1948 and 1952) .

Later, Thompson was plagued by a hamstring injury, and at the 1988 Summer Olympics in Seoul, he came fourth in this event. He retired from decathlon in 1992.

Thompson is widely considered to be one of the greatest decathletes in history. He broke four world records, won two Olympic Gold Medals, won three Commonwealth Games titles and had significant wins in both the World and European Championships.

Daley Thompson is the father of five children.

Thompson has worked as a motivational speaker and a fitness coach. In 2015, he started his own business, a gym, Daley Fitness in London, England.

He appears on Talksport, with Colin Murray & Friends

Daley Thompson suffered from hamstring injuries in the latter half of his career.