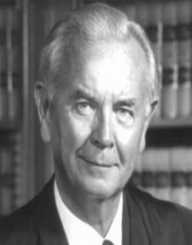 William J. Brennan Jr. was an American Associate justice of the US Supreme Court. Born on April 25, 1906, he served from 1956 to 1990, becoming the seventh longest-serving Supreme Court justice. Brennan Jr. known as the leader of the liberal wing of the court, he adopted an outspoken progressive posture, expressing his unequivocal stance against the death penalty and a proponent of abortion rights.

Brennan Jr. was earned an appointment to the Supreme Court of New Jersey in 1951. In 1956, President Dwight D. Eisenhower nominated him to the US Supreme Court, and the Senate confirmed his appointment in 1957. He since served on the court until his retirement in 1990.

William J. Brennan Jr. was born on April 25, 1906, in Newark, New Jersey. He was the second of eight children by Agnes and William Brennan, both Irish immigrants. Brennan Jr. received early education from public schools in Newark and continued at the Barringer High School, graduating in 1924.

He later enrolled at the Wharton School of the University of Pennsylvania, graduating with a degree in economics in 1928. Brennan received his law studies at the Harvard Law School, where he joined the Harvard Legal Aid Bureau and graduated in 1931.

William J. Brennan Jr. began his law practice in New Jersey specializing in labour law at the Pitney Hardin firm (later Day Pitney), in New Jersey. In 1942, the outbreak of the World War II interrupted with his practice. He joined the US Army as a major and discharged in 1945 as a colonel.

He returned to his practice in Newark after the war. In 1949, the Governor of New Jersey, Alfred E. Driscoll appointed him to the superior court. Three years later, he earned promotion to the Supreme Court of New Jersey.

Despite his affiliation with the Democratic Party, President Dwight D. Eisenhower, through a recess-appointed named William J. Brennan Jr. to the Supreme Court in October 1956. The US Senate confirmed his appointment by a voice vote on March 19, 1957, replacing Justice Sherman Minton.

He served from 1957 until his retirement in 1990. With more than three decades on the court, Brennan wrote 1,360 opinions, coming second to William O. Douglas. After retiring from the Supreme Court, he held a teaching post at Georgetown University Law Centre until 1994.

William J. Brennan Jr. established himself as an outspoken liberal during his career and a proponent of individual rights. He played a vital role in the expansion of free speech under the First Amendment, and this is evident in his Court opinion New York Times Co, v. Sullivan, 1964. That aside, he was a supporter of abortion rights and opposed the death penalty.

As such he was on the majority side in the in the death penalty case of Furman v. Georgia, 1972 and the abortion verdict on the Roe v. Wade in 1973. As a defender of the Bill of Rights, Brennan managed to get the support of many other justices on some constitutional issues.

He strongly advocated for the independence of the Judiciary the impact of procedure upon substantive rights. These positions influenced his dissent opinion in the State v. Tune, 1953, during which the defendant was deprived of having a copy of the confession. Also in Jencks v. the United States, 1957, Brennan in the court’s opinion, said the defendant has the right to examine reports of government witnesses.

William J. Brennan Jr. also dissented in Lopez v. the United States and Ker v. California defended the right to privacy as implied in the Fourth Amendment. Brennan wrote more than 1300 opinions during his more than three decades in the Supreme Court.

William J. Brennan Jr. married his high school mate Marjorie Leonard. The couple had three children, Hugh, Nancy, and William III. After the death of Marjorie in 1983, Brennan married Mary Fowler, with whom he had a child. He died on July 24, 1997, at age 91. He was interred in Arlington National Cemetery.