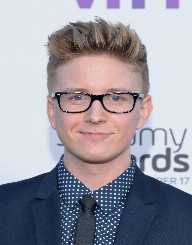 Mathew Tyler Oakley was born on March 22, 1989, in Jackson, Michigan. When he was still an infant, his parents divorced. Oakley has 12 siblings. During his time in high school, Oakley developed an eating disorder with which he struggled for many years. Despite his troubles, Oakley graduated from high school and enrolled at Michigan State University. He studied marketing, communication, and social media.

While Oakley was in his first year of college, Oakley became involved in several social media sites to keep in touch with his high school friends. In 2007, he created his YouTube channel and began posting videos. His first video on YouTube was titled Raindrops. Since then, he has acquired over 8 million subscribers to his channel with more than half billion views. Oakley posts humorous videos on politics, pop culture, and humor.

After gaining a major follower base, Oakley was noticed by several celebrities, like Ellen DeGeneres, Liam Payne, and Jerry Springer. In one of his videos, Oakley sang Christmas carols with the band One Direction. Thanks to his social media fame, Oakley was awarded the opportunity to interview former First Lady Michelle Obama.

Besides his frequent uploads on YouTube, Oakley has also made appearances on live television. He has been hosted on Insider Tonight with Kevin Frazier and Thea Andrews. In 2014, he was interviewed on the 2014 Kids Choice Awards red carpet.

In 2014, his show Tyler Oakley’s Slumber Party Tour was premiered, which features him doing humorous skits in his pajamas. His first shows in Chicago and Michigan sold out in first 72 hours. The tour was intended to go to 40 cities across the country. Oakley and his best friend Korey Kuhl competed in the 28th season of The Amazing Race and finished in the third position.

Since he became famous on various social media sites, Oakley began to be involved with The Trevor Project. The organization aims to prevent suicide amongst lesbian, gay, bisexual and transgender youth. Oakley himself is openly gay. Since 2011, he hosts the organization's charity event TrevorLIVE.