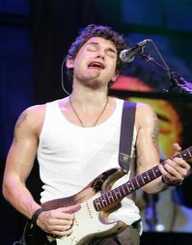 John Mayer is an award-winning American singer-songwriter, guitarist and music producer. Born on October 16, 1977, he started his music career as an acoustic rock singer but later shifted to blues. John Mayer made a music debut with his friend Clay Cook by forming the group Lo-Fi Masters in 1997 after dropping out of college. Although the group could not stand the test of time as it disbanded in a short while, nonetheless, John Mayer never looked back afterward. His first release was an EP, Inside Wants Out was released in 2001. The EP was followed with albums like Room for Square, 2001, Heavier Things, 2003, Continuum, 2006, Battle Studies, 2009 and his more recent album The Search for Everything. Mayer is a seven-time Grammy Award winner after nineteen nominations in varied categories.

John Mayer was born in Bridgeport, Connecticut to Richard and Margaret Mayer. Richard was a high school principal and Margaret a middle school English teacher. He is the second child between brother Carl and Ben. Growing up, Mayer fell in love with guitar play after watching a guitar performance by Michael J. FoxIn Back to the Future. His taste for the instrument grew so high that his father borrowed him one age thirteen. He later received a Stevie Ray Vaughan cassette from a friend, which got him interested in blue music. This interest got him to listen to another artist like Buddy Guy, Fressie King, B.B King, Otis Rush and Albert King. As the passion reached its peak, he had no choice but to take quitter lessons from a local quitter shop owner Al Ferrante.

John Mayer was educated at the Center for Global Studies at Brien McMahon High School in Norwalk. At this time, his parent became very disturbed and twice took him to the psychiatrist by was declared healthy. While in high school, he also played in bars and public gathering. He also joined the band Villanova Junction whose members were Tim Procaccini, Rich Wolf, and Beleznay. During his teenage, Mayer also suffered cardiac dysrhythmia that got him hospitalized. According to him, his songwriting skills came to life after he was discharged from the hospital. After high school, John Mayer enrolled at the Berklee College of Music in 1997 but would dropout to pursue music.

After dropping out of school through the persuasion of his friend Clay Cook, the two moved to Atlanta. While there, they formed the duo Lo-Fi Masters and performed in club venues like Eddie’s Attic and coffee houses. The group was disbanded shortly because the two had different musical values and inclination. John Mayer was more into pop music at the time. After the breakup, Mayer decided to go solo. His debut solo release was the EP, Inside Wants Out with produced by Glenn Matullo. He co-wrote most of the songs on that EP and the song No Such Thing became his first commercial single. He still continued with his outdoor performances and collaborated with LaBruyere to perform in Georgia and other states.

His performance began to attract the attention of music lovers and his appearance at the South by Southwest music festival caught the attention of Aware Records. Aware then included him in its Aware Festival concerts and subsequently on the aware compilations in 2001. The label also released his internet album Room for Squares that same year. Columbia Records later remixed the album in September 2001 as John Mayer joined the label. The remixed albums became a hit and Mayer earned several praises. Song on the album like Your Body Is a Wonderland, No Such Thing and Why Georgia also became radio hits at the concluding part of 2002. The song Your Body Is a Wonderland ultimately won him a Grammy for Best Male Pop Vocal Performance in 2003.

In 2003, Mayer released the second album, Heavier Things that also became successful commercially although it could not match the previous. He won the Grammy song of the year with the song Daughters in 2005. The album made it to number one on the US Billboard 200 chart while some songs on it also charted favorably. In 2004, he embarked on a US tour to promote the album and recorded live concerts that were released on iTune Store. After the second album, Mayer began to shift from pop to his old love “blues” and jazz by collaborating with artists of such genres. He worked with artist like Buddy Guy, Eric Clapton and John Scofield on some of their releases. He also worked with artist in the hip-hop genre including Common, Jay-Z, Kanye West, and Nelly.

John Mayer Trio And Other Albums

John Mayer formed the band John Mayer Trio in 2005 with members Pino Palladino on the bass and Steve Jordan as a drummer. The band performed rock music and blues. The band released their maiden live album Try! in November 2005 just a month after opening for the Rolling Stone in October 2005. The band, however, went on hiatus after a year of its formation. After the band took a break, Mayer released his third studio album, Continuum on September 12, 2006. The album contained both pop and blue songs. The album was well-received and gained five nominations at the Grammy Awards, winning two. Mayer’s live concert film at the Nokia Theater L.A. Live on December 8, 2007, was released under the title Where the Light Is on July 1, 2008.

In 2009, Mayer rocked on the successes of the Continuum album to release his fourth album Battle Studies. Prior to the album release, Mayer released the singles Who Says, Heartbreak Welfare, and Half of My Heart. Battle Studies was a commercial success and made it to number one on the Billboard 200 album chart. John Mayer has since Paradise Valley in 2013 that featured artists like Katy Perry and Frank Ocean. His most recent work is The Search for Everything: Wave Two released on February 24, 2017.

John Mayer has embarked in numerous philanthropy acts to give back to the society. He established the Back to You Fund in 2001, which aimed at raising funds for education, healthcare, talent, and arts development. The organization raises funds through the auction of Mayer’s signed CDs, guitar picks, and T-shirt. In 2007, he partook in the Live Earth project at the East Rutherford, New Jersey, to create awareness towards climate change. He has also performed free concerts for the Elton John AIDS Foundation, in Virginia Tech Lane Studio during the Virginia Tech Massacre in 2007 and performed in Las Vegas to raise funds in support of the Tiger Woods Foundation in 2011. He has repeated such gestures in several other forms in his service to humanity.

John Mayer is a seven-time Grammy Award winner having been nominated nineteen times in several categories. He has also won an American Music Awards, World Music Award, MTV Music Video Award, Annual ASCAP Awards and Radio Music Awards among several others. He was inducted into the Songwriters Hall of Fame in 2006.