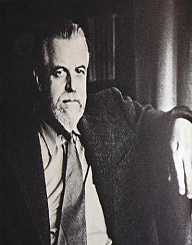 Alfred Kroeber was a prominent American anthropologist He was the first person to receive the doctorate from Columbia University. He received his Ph.D. under Dr. Franz Boas. Alfred succeeded in popularizing the subject of Anthropology. His book ‘Anthropology’ (1923, 1942) was one of the most influential books at that time.

His book was the only textbook available for students of Anthropology. It has been used for many years.

Alfred Kroeber was born in Hoboken, New Jersey on 11 Jun 1876. His parents were Florence Kroeber, a German immigrant and Johanna Muller of German descent. The family moved to New York when Alfred was quite young. Alfred was tutored by Dr Bamberger from the age of seven.

Alfred went to Sachs Collegiate Institute and then to Columbia University in 1892. He received his A.B. in English in 1896 and the following year an MA in Romantic Drama. Alfred then shifted his subject of study to the newly developing field of anthropology. His personal experience growing in a German family which had migrated to the US was a motivation factor to study cultural behavior of people and passion for anthropology.

Alfred was awarded his doctorate under Professor Franz Boas in 1901. His dissertation was on decorative symbolism on his fieldwork among Arapaho.

Alfred also conducted excavations in New Mexico and Peru. Alfred Kroeber with his students did considerable work on Western Tribes of Native Americans. Kroeber and Roland B Dixon worked on genetic classification of Native American languages in North America. They were responsible for theoretical groupings like Penutian and Hokan.

His work with Ishi, who was claimed to be the last California Yahi Indian, provided detailed information about the Yahi tribes.

Alfred Kroeber published several books in anthropology. His textbook ‘Anthropology’ was used for many years. He worked with his students and collected data on Western tribes of Native Americans. They were published in the ‘Handbook of the Indians of California’ (1925). His cultural concepts were published in 1939 in ‘Cultural & Natural Areas of Native North America.’

His book ‘Basic & Secondary Patterns of Social Organisation’ was published in 1938 and later republished in ‘Nature of Culture’1952. His book Configuration of Culture Growth (1944) impacted social scientific research on genius and greatness.

Alfred Kroeber received many honorary degrees for his work on anthropology. They include Yale, California, Harvard, Columbia and Chicago Universities. In 1912 he was made a Fellow of the American Academy of Arts & Science. Alfred was President of the American Anthropology Association (1917-1918). The anthropology department’s headquarters building at the University of California is named Kroeber Hall in his honor.

Alfred Kroeber married Henrietta Rothschild in 1906. She contracted tuberculosis and died in 1913 after a prolonged illness. Kroeber then married Theodora Kracaw Brown, a widow with two sons Ted and Clifton whom he adopted. Theodora and Alfred had two children Karl and Ursula. His daughter Ursula is an acclaimed novelist, poet, and writer of short stories.

Theodora wrote a biography which was well received titled ‘Ishi in Two Worlds.’ A film on Ishi was also made ‘ The Last Of His Tribe’ (1992). In 2003 Clifton Kroeber & Karl Kroeber published a book of essays on Ishi’s story called ‘Ishi in three centuries.’