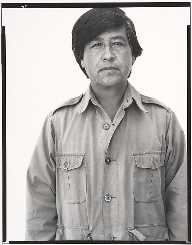 Born March 31, 1927, Cesar Estrada Chavez was an active civil right and labor activist from America. With support from organizations like the American labor movement, he became a passionate activist for the Latino Americans since he also has a Mexican root. To have a platform to propagate his advocacy, Chavez alongside Dolores Huerta founded the National Farm Workers Association which later became United Farm Worker Union (UFW) in 1962. Being motivated by a thoughtful and nonviolent approach to solving issues, UFW, gradually gained the negotiation power for some field workers.

In 1970, UFW bargained for about 50,000 field workers in California and Florida. Colegio Cesar Chavez was named in his honor and posthumously named after schools, streets, and park. He has since his death become a historical icon for the Latino Community in America. He is also an icon and a symbol of leftist politics and empowerment of Hispanic workers.

Cesar Chavez was born to Mexican-American Juana Estrada and Librado Chávez in Yuma, Arizona. Named after his grandfather, Chavez also had two sisters and two brothers. His childhood days were spent at his birthplace before moving with his family to California. This was because they lost their home and lands during the Great Depression.

Chavez family was met with intense hardship in California and had to be picking seasonal farm produce to make a living. Due to the difficulty, in 1942, Chavez dropped out of school in seventh grade to help ease the economic hardship of the family. He then became a full-time migrant farm worker before later joining the United State Navy for two years. He, however, describes his years in the Navy as the worse within that time.

Cesar Chavez commenced his activism after he assumed the position of an organizer for a Latino civil right group, Community Service Organization (CSO). During this time, he embarked on several journeys in his bid to raise support for workers rights. He also used his position to advocate for Mexicans in America to register and vote. Chavez rose through the ranks to become the national director for CSO in 1958. After working with CSO for nearly a decade, he left to co-found, National Farm Workers Associational, in 1962. The name was later changed to United Farm Workers.

With his strong passion for farm workers right, Cesar Chavez and his union led the historic farmworkers march by California grape pickers from Delano to California on September 8, 1965. He continued with other activism and advocacy for the likes of fruit workers in Starr County and inspired the formation of Obreros Unidos in Wisconsin, 1966 and Farm Labor Organizing Committee in Ohio, 1967.

Chavez’ campaign and activism were not limited worker and civil but also extended to immigration issues. He and co-founder of UFW, Dolores Huerta advocated against the Bracero Program. The program which existed between 1942 and 1964 promoted cheap labor which in no small extent exploited migrant workers. It also prevented the migrant workers from protesting for better working conditions least they are replaced.

According to their claims, the program also undermined the US workers. The Program was abolished in 1964. The two through UFW also fought against a sanction to be placed on employers who hired immigrants in 1973. In his bid to protest against growers’ use of strikebreakers and immigrants, Chavez led a march to the Mexican border in 1969. The movement was joined by a US Senator, Walter Mondale, and Rev Ralph Abernathy.

Cesar Chavez sometimes engaged in fasting before embarking on some of his civil and workers’ activism. He fasted for 25 days in 1968 to uplift his nonviolence principles. In preparation towards a scheduled civil disobedience by farmers, he embarked on thanksgiving and hoped fast. He once again fasted in 1972 in protest against legislation that forbids the boycotts and strikes by farm workers during the harvest seasons in Arizona. The fasting motivated by Mohandas Gandhi and the Catholic tradition penance fasts.

Cesar Chavez since his death has been held in high esteem by the Hispanic community in America. March of each year has been set aside by the Hispanic city of Laredo as "Cesar Chavez Month." The month is characterized by activities like citizen marches attended by local politicians and students and organized by League of United American Citizens.

Cesar Chavez Holiday Parade is also organized on the second weekend of April each year by the Mission District of San Francisco in his honor. March 31, each year is also a designated holiday in California, Texas, and Colorado. He has also had mentions in songs by famous singers like Stevie Wonder and even in the drama American History X. César E.

Chávez Foundation opened the National Chavez Center in 2004 at the UFW headquarters in Keene. Cesar E. Chavez National Monument was added to the National Park system by President Obama on October 8, 2012. University of Texas, Austin and California State University, San Marco has Chaves statues on their campus. A film Cesa Chavez, which documented his life during the 1960s and 70s, was released in 2014.

Cesar Chavez had several awards and honors for his dedication to advocacy for the less endowed in the society. He was given the Jefferson Award for Greatest Public Service Benefiting the Disadvantaged in 1973. Other awards include the Pacem in Terris Award in 1992, Presidential Medal of Freedom by President Clinton in 1994 which was received by his widow. He was also inducted into the California Hall of Fame by Governor Arnold Schwarzenegger on December 6, 2006.

Cesar Chavez was married to Helen Fabela, his high school lover in 1948. The two were blessed with eight children. Chavez until his death lived with his family in San Jose, California. He was a vegetarian.

Cesar Chavez’s death was sudden but described as a natural death. He died on April 1993, at his longtime friend and former farm worker home in San Luis, Arizona. The two were said to be working with UFW attorneys to file their defense in a lawsuit against the union. He was buried at the National Chavez Center. His black nylon jacket was donated to the National Museum of American History by his wife.