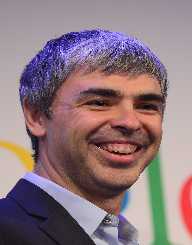 Larry Page was born on the 26th of March 1973 in East Lansing, Michigan in the United States. This birthday coincides with very many other Global Historical events. Some of them include: on 26th March 1945 Venray soccer team was formed, 1954 US performs an atmospheric nuclear test on Bikini Island. In 1975 The Biological Weapons Convention came into effect, 1996 The International Monetary Fund approves a $10.2 billion loan for Russia among others. He is also known as Lawrence Page.

Larry Page is a co-founder of the great Google Company. His father is Carl Page who was a computer science professor at the great Michigan State University. Many people have described him as the "pioneer in computer science and angling. On the other hand, his mother, Gloria was a computer programming instructor at the Lyman Briggs College and later on at the Michigan State University. His sibling is Carl Victor Page, Jr.

Larry married the brilliant research scientist Lucinda Southworth in 2007. The couple has been blessed with one child so far. Page's sister-in-law Carrie Southworth is an actress who has featured in several programs including the famous General Hospital. At his tender age, Larry showed excessive interest and love for technology, innovation, and business. As time went by, he developed a greater appetite for computers.

Larry Page is one of the respected graduates of the University of Michigan with a computer engineering degree from 1975 to 1979. Later on, he proceeded to Stanford in pursued of a Ph.D. in computer science. His vast knowledge of computer science is what set him ready for his future career. He is associated with Sergey Brin. Brin assisted him in the creation of a search engine that was able to return results based on the popularity of the respective pages.

Larry also had his contributions in building the most profitable and also successful internet company in World history before Mark Zuckerberg had popularized Facebook. Google has achieved its most magnificent landmark in History with over 6 billion searches in a single day as far as 2013 records are concerned.

In 1998 Larry Page and his longtime friend Brin launched the Company under the name ‘Google Inc.’ The pair combined their amazing ideas while in the University. They utilized their dormitories as laboratories and as an office in their initial struggles. The two friends had a mission to organize the world’s information and make it accessible to each and everyone in the current global village. By the year 2000, they moved into the new Mountain View office.

Billionaires Kleiner Perkins Caufield and Byers and Sequoia Capital into the company agreed to invest their combined huge amount of $50 million into Google Company, and they had to apply a lot of pressure on Larry to step down as CEO. The plan was to bring in a more experienced leader who could build a "world-class management team for the Company.

The Google Company has grown into one of the most profitable and successful industries in the world. After the two gentlemen had raised $1 million from their families, investors and friends, they launched the company. The headquarters of the prestigious and famous Company is situated in California’s Silicon Valley. Google held its initial public offering in August 2004. This public offering made Page and Brin billionaires. The two friends served as company co-presidents up to 2001 when Eric Schmidt was appointed to the prestigious position of Chairman and CEO of Google.

Larry Page also serves as a member of the Board of Directors of the Famous Google Company. Over time, Page has also grown interest in renewable energy. As a result of this, in 2004, the Company set up the philanthropic branch which is meant to deal with climatic issues and renewable energy. Besides, in 2005 Page led the full acquisition of Android that was valued at around $50 million fulfilling his ambition to place handheld computers into the possession of consumers so that they could easily access Google from anywhere globally.

On April 4th, Larry officially became the chief executive of the famous Google Company. In October 2014 Page made important management restructure of the Company to enable the employees to run the typical day to day activities of decision-making in the enterprise. Besides, Page is also interested in the socio-economic impacts of progressive, intelligent systems. It is through focusing on how advanced digital skills can be used to create efficient abundance in the modern World.

Furthermore, the benevolent wing of the Google Company, Google.org, was formed. The primary aim of this was to dedicate more time and financial resources to finding technological solutions to help in addressing global challenges such as hunger and poverty. On August 10, 2015, Page and Brin brought forward the good news to the World that Google had created a new parent company known as Alphabet. The organization was to oversee Google and its subsidiaries.

In 2002, the duo, (Page and Brin) were named by the prestigious MIT Technology Review for being among the top 100 innovators with age less than 35 years. In (2004) the duo received the prominent Marconi Foundation Prize which is unique and only given to honor significant contributions to science and technology. In 2002 The World Economic Forum named Page as a Global Leader for Tomorrow.

Net worth and trivia

As per Forbes statistics, Larry Page has a net worth of $39.1 billion. He is ranked 12th in the great Forbes World List of Billionaires. Even though he enrolled for a Ph.D. at the Stanford University, Page did not complete it because of his commercial endeavors. His younger brother Carl Page Jr. is also an internet industrialist and guru.