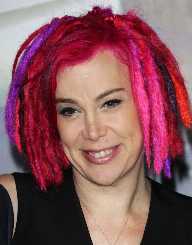 Lana Wachowski was born on June 21, 1965, in Chicago, as a male child called Laurence Wachowski. He was the elder brother of Andrew, Julie, and Laura. Andrew later became Lily, a transgender woman in adulthood. They were the children of Ron and Lynne Wachowski.

Growing up in Chicago, Lana Wachowski went to Kellogg Elementary School. She then enrolled at the Whitney Young Magnet High School. Lana started experimenting with her artistic talents in the school theater group. She graduated in 1985. She then went to Bard College based in New York. Lana did not graduate.

She worked as a carpenter and house painter in a self-employed business enterprise for a while in Chicago.

Teaming up with Lily, Lana started writing comic books for the Marvel Comics in 1993. Lana Wrote several copies for the Ectokid comic series. She also wrote copies of the horror comic Hellraiser and Nightbreed for horror inclined novelist Clive Barker. The horror comics were produced under the Epic Comics under the mother entity Marvel comics.

After a stint with comics, Lana and her sister went into the film industry. In 1994 Lana wrote the script for the film titled Assassins. The film was produced in 1995 by the Hollywood giant Warner Bros. In 1996 Lana and her sister directed their own script film called Bound. The Wachowskis became overnight celebrities for their film release.

In 1999 Lana directed the film Matrix. In the science fiction, action-packed movie, Lana assembled a host of known Hollywood stars including Keanu Reeves. Matrix became a commercial success for the two young directors. They did two sequel films on Matrix. In 2003 they released The Matrix Reloaded and The Matrix Revolutions. Far from the euphoria generated by the original Matrix film, the follow-ups proved less commercial success in the industry.

Lana then returned to her earlier origins of comic writing. She wrote a comic series titled Bits and Pieces. By the end of 2004, Lana produced two volumes of the comic series she had written with Lily. Lana Wachowski did another comic based film production titled Vendetta. The film was produced in 2006 to much acclaim from the critics. Lana set the film under the backdrop of a revolutionary wave sweeping across England. In the late 2000s, Lana produced two films. In 2008 she produced Speed Racer, followed by the 2009 film Ninja Assassin.

Lana Wachowski released the movie Cloud Atlas in the late months of 2012. The highly rated film was based on the novel by the same title written by David Mitchell. She did another production atlas released in the same year. Lana did the film Jupiter Ascending released in February 2015. The film was praised for the technological extras in enhancing its quality. She did Sense8, a Netflix Channel series film which got a warm reception from the industry. The Netflix series ended its production in 2018.

Apart from the film scriptwriting and directing, Lana has done video games and other comical productions during her career. She also did a music video in 2009 titled Epilepsy Is Dancing.

Lana has been nominated 20 times for film prizes by different institutions since 1997. She won five of the nominations. In 1997 she won three awards for her film Bound. In 2000 she won two awards for the film production The Matrix.

Lana publicly acknowledged her gender issues in 2012. She started having transformation therapy from 2000. She completed the gender transformation journey in 2008. She is a champion advocate for the right of the identity of the Lesbian, Gay, Bisexual, and Transgender or LGBT community in the US. She received the Human Rights Campaign Award in 2012 for her efforts in the recognition of the community.

Before her transformation, Lana then a man married Thea Bloom on October 30, 1993. The couple divorced in 2002. In 2009 Lana now a transgender woman married Karin Winslow. They are still together in the US.

On divinity, Lana grew up in a Catholic family background by her Polish American father. After her discovery journey, Lana is non-affiliated to any denomination of the Christian faith. She practices a strict vegetarian diet.

On the political front, Lana is a Democrat. She endorsed the candidacy of Bernie Sanders in the race for the Democratic ticket against Hillary Clinton.

Lana Wachowski came from a background of a college dropout to be a celebrated comic writer and film director. She used the influence of other writers to break into her own successful life of film making.