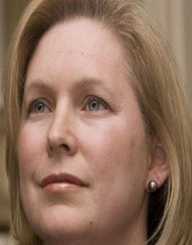 Kirsten Gillibrand is an American politician and attorney born on December 9, 1966, in Albany, New York, U.S. She is the incumbent United States Senator from New York and serving since January 2009. She was also a member of the U.S House of Representatives from New York’s 20th District from January 3, 2007, to January 26, 2009. She is an active member of the Democratic Party and has been on the front line to address issues like sexual assault and sexual harassment in the military.

Kirsten Gillibrand started working as an associate at a law firm of Davis Polk & Wardwell in Manhattan in 1991. She later worked as a clerk to Judge Roger Miner at the United States Court of Appeals for the Second Circuit in Albany in 1992. In 1999, she became actively involved in Hillary Clinton’s US Senate campaigns encouraging women to back up Clinton in the 2000 elections. In 2001 she started working at Boies, Schiller & Flexner in Manhattan before transferring to the firm’s office in Albany in 2002. In 2005 after leaving Boies, she began her campaigns for the 2006 Congress seat.

In 2006, Kirsten Gillibrand ran for the New York's 20th congressional district against her Republican opponent and three-term incumbent John E. Sweeney. She was running on a Democratic Party ticket with support from her close ally and mentor Hillary Clinton. On November 5, 2006, she gained victory defeating Sweeney by 53% of the total votes cast.

In 2008, she won her bid for re-election against Sandy Treadwell and began engaging in progressive reforms including voting against the Emergency Economic Stabilization Act of 2008, restricting illegal immigrants from having driving licenses and was in favor of laws that will not permit federal funds from immigrant sanctuary cities.

Kirsten Gillibrand is married to Jonathan Gillibrand who she met on a blind date and together has two sons Theodore born in 2003 and Henry born in 2008. She lives with her husband and two children in Brunswick. She is currently fifty one years old and has published a book titled ‘Off the Sidelines: Raise Your Voice, Change the World’ (2014).