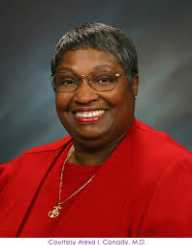 Alexa Canady was born on the 7 November 1950 into a comfortable upper-middle-class family in Lansing, Michigan. Her father, Clinton Canady, Jr. was a dentist and her mother Elizabeth Golden was a teacher.

Alexa Canady then became a surgical intern at Yale-New Haven Hospital (1976) before training at the University of Minnesota where she became the first African-American women neurosurgery resident in the country. She was appointed a pediatric neurosurgery fellow at the Children’s Hospital of Philadelphia (1981-1982) and in 1984 became and first African-Woman neurosurgeon to be certified by the American Board of Neurological Surgery.

In 1987, Canady was appointed Chief of Neurosurgery at the Children’s Hospital of Michigan and remained there until she retired in 2001. Living in Florida, she practised part-time at the Pensacola Scared Heart Hospital as a consultant and part-time surgeon.

Awards and recognition Alexa Canady received include the Children’s Hospital of Michigan’s Teacher of the Year Award (1984), the University of Detroit  Mercy Medallion (1988) and the American Medical Women’s Association President’s Award (1993). She was inducted into the Michigan Women’s Hall of Fame (1989).

Alexa Canady and her husband George Davids relocated to Florida in 2001. She retired in 2012.