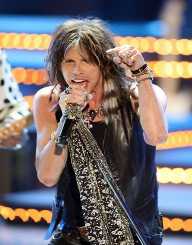 Steven Tyler is an American musician who is best known as the lead singer of the rock band, Aerosmith.

Steven Tyler was born on 26 March 1948 in Manhattan as Steven Tallarico. Tyler grew up in the Bronx and Yonkers with his mother, Susana née Blanca, and his father, Victor Tallarico. His father was a classical musician and taught music at a local high school. Tyler attended Roosevelt High School in Yonkers. The Rolling Stones were a major influence on a young Tyler. He participated at a Rolling Stones concert in 1965 and got to meet the band.

Steven Tyler wrote music and played drums with some bands before he met Joe Perry and Tom Hamilton at a concert for Perry and Hamilton’s band Jam Band. They agreed to form a group together, and Tyler insisted on taking vocals. He also invited friends Joey Kramer and Ray Tabano to form the band's line-up. The band based itself in Boston. Brad Whitford quickly replaced Tabano. The band, Aerosmith, toured the clubs of Boston developing a following. In 1972, they signed a record deal with Columbia Records. They released their first album, Aerosmith, in 1973. The album featured the Tyler penned track Dream On. The album made it to twenty-one on the American Billboard charts and had sold two million copies. The single Dream On would be reissued, and in 1976 it reached number six on the Billboard charts. Aerosmith’s second album, Get Your Wings, failed to gain chart success, and none of its singles performed well either. The band’s real breakthrough came with the 1975 release of Toys in the Attic.

The album has sold eight million units and peaked at number eleven in the charts in America. It also featured the singles, Sweet Emotion and Walk the Way.Sweet Emotion, a rereleased Dream On and Walk this Way produced three hit singles in quick succession for the band and greatly boosted their popularity. By this stage, the band was indulging in copious amounts of drugs and alcohol, but this did not slow their productivity, and in 1976 they released a fourth studio album, Rocks. Rocks peaked at number three in America and are rated as the band’s best work by many fans as it features a rawer and heavier sound than their other works. Off the back of their success, Aerosmith was able to headline their stadium tour. The cracks in the band began to form in 1977 during the recording of their fifth album Draw the Line.

Tyler and the others had become full-blown drug addicts. Despite this, the album went platinum in America within a month and also had success in Canada and Japan. The constant touring and drug abuse eventually led to arguments, and Joe Perry left Aerosmith in 1979. The first album release without Perry was a huge disappointment, only managing to achieve gold certification. Tyler’s health also began to abandon him due to his addiction, and while touring to promote the Night in the Ruts album, he collapsed on stage.

He then was involved in a motorcycle crash and hospitalized for months. A most excellent hits album was released to bridge the gap, and it sold eleven million copies. The band then released another disappointing album, Rock in Hard Places, in 1981. Joe Perry reunited with the band for a performance in Massachusetts, but Tyler and Perry indulged in drugs before the show, and Tyler again collapsed on stage. The band reunited properly in 1984. The band went on the ‘Back in the Saddle Tour’ to celebrate the original line-up reforming, but despite being a success, it continued to be dogged by drug-fuelled controversies. Done With Mirrors was released in 1985, but it was again a disappointment. Aerosmith was in danger of becoming a touring band until in 1986 Tyler, and Perry appeared in collaboration with Run DMC on Walk this Way.

The rock/hip-hop crossover received huge amounts of airtime and relaunched Aerosmith’s popularity. Another key turning point came with Tyler agreeing to go into rehabilitation for his drug problem. The whole band agreed to get clean, and the 1987 album Permanent Vacation sold five million albums. It also featured the hit singles, Rag Doll and Dude (Looks Like a Lady). The now-sober Aerosmith went on tour with Guns N Roses to support their album. This was controversial as Guns N Roses were going through their well-publicised drug binge and Tyler and Perry had previously bought drugs from members of the band. Despite this, the band stayed on the straight and narrow and released Pump in 1989. Pump was even more successful than its predecessor and sold seven million copies.

It also contained several major hits, Janie’s Got a Gun, Love In an Elevator and What it Takes. The band promoted the album with a yearlong tour and an appearance on Saturday Night Live. The band appeared in a Wayne’s World sketch which was named by many as the best moment in the history of Saturday Night Live. The band also appeared in the animated show The Simpsons in 1991, performing at the shows local bar in exchange for all you can eat pickled eggs. 1993 saw Aerosmith release another huge commercial hit, Get a Grip. The album sold twenty million records but was panned by critics for its pop music vibe and overemphasis on power ballads. The band was also criticised for bringing outside songwriters during the production of the album. The band would then feature on the MTV animated show Beavis and Butt-head’s compilation album.

The band released Nine Lives in 1997. It was deeply unsuccessful in comparison to their other releases and saw the end of their collaboration with manager Tim Collins. Tyler also injured his leg while on tour promoting the album. Despite the misfortune surrounding it, the album did feature the single hit Pink. The band reached number one in the USA in 1998, with the theme song to the film Armageddon, Don’t Want to Miss a Thing. The band were made the feature of Disney World’s ‘Rock n Roller Coaster’ in 1999. The band played the halftime show of the 2001 Super Bowl. The same year they were inducted into the Rock and Roll Hall of Fame. Tyler again injured himself when he fell off stage in 2009. Following the fall he checked into rehab. Tyler became a judge on American Idol in 2011. Tyler continues to tour with Aerosmith.

Steven Tyler, twenty-seven at the time, dated sixteen-year-old Julia Holcomb in the early days of Aerosmith. Tyler had Holcomb’s parents sign over guardianship so she could live with him. The relationship ended when the Holcomb became pregnant and had an abortion. Tyler fathered Liv Tyler, who would appear in the video for the Aerosmith video for the song Crazy, with model Bebe Buell. In 1978 Tyler married Cyrinda Foxe and had a daughter, Mia, with her. They divorced in 1987. Tyler married Teresa Barrick in 1988. Together they had two children, Chelsea and Taj. Tyler and Barrick divorced in 2006. In 2013, Tyler and long-term girlfriend Erin Brady broke off their engagement. Tyler is known to suffer from hepatitis C.