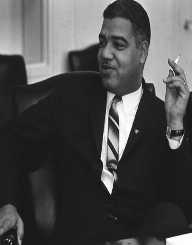 Whitney Young Jr. was an American civil rights activist who as the head of the National Urban League helped secure the socio-economic freedom for many blacks in the US.

Whitney Moore Young Jr. was born in Kentucky on July 31, 1921. He was the second born with two sisters born to Whitney Young Sr. and his wife Laura. Young grew up in an intellectual household. His father served as the principal of Lincoln Institute, while his mother was a school teacher. In 1937, he went to Lincoln Institute for his preparatory education. After his graduation, he joined Kentucky State Industrial College. He graduated with a Bachelor of Science degree in June 1941, with the hope of pursuing a career in human medicine.

He taught for one year and joined the US military in July 1942. He served in the anti-aircraft unit and got promoted to the rank of Sergeant in his third month in the army. As a Sergeant in a deeply segregated army, he often served as the mediator between the white officers and the black soldiers during disputes and other occurrences in the line of duties. Young left the army after the liberation of Europe from the Nazis.

In 1947, he graduated from the University of Minnesota with a Master degree in Social Work. Later in the year, he joined the civil rights group National Urban League in Minnesota. He used his mediation experience gained from the army to convince white-owned companies to employ black workers. Hundreds of black workers got employed through his efforts in the Urban League offices.

In 1950, young got promoted and relocated to the Urban League offices in Omaha, Nebraska. As the head of the organization in Nebraska, he gained the placement of black workers in skilled and semi-skilled jobs in white companies. Young created an interracial club in Omaha to foster relations between the white owners and their black workers. Young transformed Omaha into a racially tolerant city. White schools employed black teachers and blacks were allowed to reside in white neighborhoods.

In 1954 Young went to Atlanta University as the head of the School of Social work. He reestablished the faculty to its former glory. Young expanded the intake of students and empowered lecturers through advanced learning. Despite the milestones in the university, Young left the south in 1959.

He went to Harvard University for one year on a scholarship in preparation to replace the Urban League’s national president. He became the Urban League’s national president in 1961. In the New York head offices, he realized the financial constraints facing the organization. He organized meetings with white philanthropists who in turn agreed to finance the activities of the organization. Some of the white organizations included Rockefeller Foundation, IBM and RCA.

He reorganized the administrative structure replacing most of the old guards with young vibrant faces. He embarked on expanding the regional branches across the country. Young introduced economic empowerment programs like employment data banks. The data banks served as pools of names and credentials for black youth seeking employment. Other programs included secretarial training programs, training contracts from the government Labor Department, and internships for vocational training.

In maintaining its roots as a civil rights organization, Young convinced the leadership of the Urban League to join the increasing protest marches against racial atrocities. He overcame the initial objections and led the League to participate in protests including the 1963 March on Washington. The success of the march elevated the organization to the forefront of the civil rights movement. Young managed to tread the thin line of balancing his support for the marches while reserving the support of the whites.

Young’s position as president of the Urban League exposed him to meetings with US government officials. He had several meetings with then US President John Kennedy. He maintained a closer working relationship with Presidents Lyndon Johnson and Richard Nixon. In his role as presidential advisor on interracial matters, Young advocated his black empowerment plan. The so-called Domestic Marshall Plan projected the systematic advancement of the black community through equal education and employment opportunities. He chaired presidential appointed committees during the administration of all the three presidents.

Young became a vocal critic of the Vietnam War and on many occasions publicly spoke against many of President Nixon’s policies. His stance alienated most of his white sponsors to the Urban League. Young got financing from the US government for his organization. He developed the New Thrust Program to help empower the inner cities during the late 1960s.

Young married Margaret Buckner on January 2, 1944. He wrote several books including To Be Equal, and Beyond Racism: Building an Open Society.

Whitney Young Jr. died in Lagos Nigeria on March 11, 1971. He drowned while in a swimming pool. The official autopsy report indicated brain hemorrhage as the cause of death. He was 49 years old.

In 1968, he received the US Presidential Medal of Freedom. Several educational institutions have been named after him. A national landmark in the US like the Whitney Young Memorial Bridge in the US capital is named after him. In Hollywood, several film directors have released documentaries about his life. He remains one of the unsung heroes of the civil rights movement.