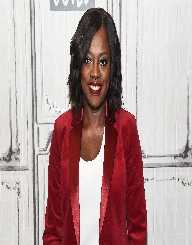 Viola Davis is an American actress and producer born on August 11, 1965. Beginning her acting career on stage, Davis rose to fame, becoming the first and only African-American actress to be nominated thrice at the Academy Awards winning one. She has played roles in numerous theatre, television and films starting with You Like It in 1992. Some of her other notable works are Law & Order: Special Victim Unit, Kate & Leopard, Far From Heaven and Doubt. Davis has won several awards including a Golden Globe Award, SAG and a Tony Award among others.

Viola Davis was born to Mary Alice and Dan Davis in St Matthews, South Carolina. She is the fifth child of six by his parents. She later moved with her mother and two other sisters to Central Falls, Rhoda Island. Mary Alicem was a civil right activist and her involvement in a Civil Rights protest sent her and Davis to jail. Viola Davis was just two years at the time.She had her education at the Central Falls High School where she partook in several activities.

Viola Davis was a very active person and involved herself in the federal TRIO Student Support and TRIO Upward Bound programs. She also enrolled at the Young People’s School for Performing Arts in West Warwick, Rhode Island.

She later graduated from the Rhode Island College in 1988 where she majored in theatre. Viola Davis further took a four-year course at the Juilliard School (1989 to 1993) where she was involved in the school’s Drama Division. In 2002 she was honored with an honorary doctorate in Fine Arts. According to Davis, she was brought up in abject poverty and reminisces some moments she spent in rat-infested and condemned rooms.

Viola Davis started her acting career in an off-Broadway As You Like It in 1992 and continued with a debut in television series with a role in NYPD Blue. The same year she also had her film debut playing the role of a nurse in The Substance of Fire of which she was paid $528. She continued to play roles in New York Undercover as Mrs. Stapleton in 1996, out of Sight in 1998, The Pentagon Wars in 1998 and her award-winning drama Everybody’s Ruby in 1999. Davis won the Obie Award playing as Ruby McCollum in that drama.

Since then, Viola Davis has played several roles in television and films like Kate & Leopard in 2001, Far From Heaven in 2002 and Law & Order: Special Victim Unit. As a black actress, she faced some challenges going forward but that never discouraged her. Viola Davis role as Tonya, fearless 35-year-old women insisting on her right to have an abortion in King Hedley II in 2001. She won the Tony Award for Best Featured Actress in a Play as well as Drama Desk Award for her role.

Viola Davis continued playing other minor roles until her first big shot finally came. In 2008 she played a role as Mrs Miller in the drama Doubt which would propel her into achieving greatness. Viola Davis gained lots of nomination for her role including an Academy Award for Best Supporting Actress, Golden Globe and a SAG Award.

She gained lots of popularity at the stage of her career playing device roles but will certainly gain the recognition she deserves in the drama Fences. Her outstanding performance playing alongside Denzel Washington won her a Tony Award for Best Actress in a Play.

Viola Davis was on a non-stopping mode now proving herself wealthy in her own rights and playing characters as if she were them. In 2011 he played a lead role as Aibeleen Clark in the drama The Help. Superb performance and her display of character won her a SAG Award and an Academy Award for Best Actress nomination. Relentlessly moving forward and defying all odds, she took a role in the ABC drama, How to Get Away With Murder playing lawyer Annalise Keating in 2014. Her role won her the Primetime Emmy Award in 2015 becoming the first Africa-American actress to win that award and also won her a SAG Award. Davis finally won an Academy Award in 2017for her reprising role in Fences in 2016. She also won awards like the BAFTA, SAG, Golden Globe and Critics’ Choice Award.

Viola Davis partnered her husband Julius Tennon to establish a production company JuVee. In 2015 she featured in Lila & Eve and also Custody in 2016 all by her production house.

Viola Davis is married to actor Julius Tennon since June 2003. The couple adopted their daughter Genesis at birth in 2011. Davis also took charge of Tennon’s two other children from his former relationships.