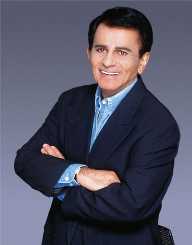 Kemal Amin “Casey” Kasem was born on April 27, 1932, in Detroit, Michigan. His parents were immigrants who settled in Michigan and worked in grocery industry. At an early age, Kasem was inspired to pursue a career in radio. He got his first experiences covering the sports news at his school- the Northwestern High School.

After high school, Kasem continued his education at the Wayne State University. Over there he also continued with his radio career. He began to voice children on radio programs such as The Lone Ranger and Challenge of the Yukon. In 1952 he had to leave school because he was drafted to the army and sent to Korea. Despite the circumstances, Kasem found a way to do what he is passionate about and started working on the Armed Forces Radio as DJ.

After the war ended, Kasem began his professional career working in Flint, Michigan. After that, he was working in Detroit, Buffalo, and Cleveland, until moving to California. In San Francisco, Kasem worked at the KYA radio and KEWB in Oakland. There he was the on-air personality and director. His career started to pick up after Bill Gavin heard him. Gavin recruited Kasem as a partner, and he joined the KRLA in Los Angeles in 1963.

Kasem also earned several roles in small movies and TV. He was hired as a co-host on the music show Shebang in 1964, and also starred in TV series Hawaii Five-O and Ironside. His voice was always his biggest strength, therefore, Kasem begun to work as a voice actor. His most notable works from this time was as Shaggy on Scooby-Doo cartoons and drummer Groove in The Chattanooga Cats.

In 1970, Kasem and his associates launched the weekly radio program American Top 40. Since radio DJ mostly chose to play progressive rock at the time, Kasem’s pop single countdown earned major popularity. Kasem also told his listeners about the biography of artists and other segments. The show debuted on seven radio stations, making Kasem’s voice recognizable all over the country. The successful show also spawned into a weekly music video television show Americas Top 10, which Kasem was hosting. He became known not only as a DJ, but also a music historian. Besides his work on the radio, Kasem continued his work on several film projects.

In 1988, after a contract dispute with ABC Radio Network, Kasem left the American Top 40. He signed a five-year, $15 million contract with Westwood One and started a new show Casey’s Top 40. The show took its singles from the Radio & Records Contemporary/Pop chart. He also hosted two other countdown shows- Casey’s Countdown and Casey’s Hot 20. At the time, he was also a voice actor in Battle of the Planets and the Transformers animated series. Kasem was also hosting the New Year’s Eve countdown.

After Kasem left the original American Top 40, the show was canceled in 1955. In 1997, Kasem regained the rights to the name of the show and went back on air on the AMFM Network in 1998. In 2003, after his contract expired, he left the show and was replaced by Ryan Seacrest. Nevertheless, Kasem continued to work on the station and hosted American Top 20, which was later shortened to American Top 10.

The radio station discontinued Kasem’s two shows and ended their 11-year work relationship. Kasem decided not to bring his show to a different radio station and announced that he would be leaving radio world to pursue other ventures. During his career, he has appeared in numerous movies and voiced around 100 commercials.

Kasem was passionate animal rights and environmental activist. He was a vegan and criticized factory farming. He was also active in politics and supported Lebanese-American and Arab-American causes. He was a liberal and supported Jesse Jackson’s presidential campaigns in 1984 and 1988. He also supported campaigns of Ralph Nader and Dennis Kucinich.

In 1972, Kasem married Linda Myers. The couple had three children, but the marriage ended in divorce in 1979. In 1980, he married actress Jean Thompson and was together with her until his death. The couple had one child.

In 2013, Kasem found out that he is suffering from Lewy body dementia, which was similar to Parkinson’s disease. His condition quickly worsened, but his wife prevented any contact with her husband, especially from his children from the first marriage. His children and several friends started a protest in front of his home. His children sought conservatorship of their father’s care, but the court denied their petition. In 2014, his wife removed him from the Santa Monica nursing home, and several days later, his daughter Kerri was granted temporary conservatorship. The family drama continued until Kasem was no longer responding to artificial nutrition. He died on June 15, 2014.