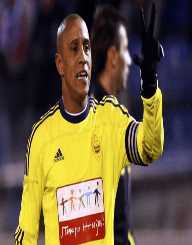 Roberto Carlos is a Brazilian footballer who is best known for his free kick against France in 1997 and being part of the Brazilian 2002 World Cup winning team.

Roberto Carlos was born in Sao Paulo, Brazil on 10 April 1973. His family was very poor and his parents, Oscar da Silva and Vera Lucia da Silva, worked on a coffee plantation. Carlos began working in a textile factory at age twelve to help support his family. Carlos loved football, the national sport of Brazil. He signed for Uniao Sao Joao, a local club, and played underage football for them.

Roberto Carlos was loaned out by his club to Atletico Mineiro, and he was called up to the Brazilian national team in 1992. Carlos took part in Athletic Mineiro’s European tour and played three games. He moved permanently to Palmeiras, another Brazilian club. Carlos enjoyed great success with Palmeiras, winning two national titles. Carlos began to attract attention from clubs in Europe. He was offered a contract by English club Middlesbrough but signed with Internazionale, an Italian club.

Carlos enjoyed a brilliant debut in Italy scoring a free kick in what would become a hallmark of his play. However, his time in Italy was unsuccessful as the club only finished seventh in the league and Carlos was being played out of position by manager Roy Hodgson. Unhappy at being asked to play as aw winger Carlos moved to Spanish giants, Real Madrid, in 1996. It was here that Carlos enjoyed the most successful spell of his career and became a global household name.

Carlos was one of Real Madrid’s most influential Galacticos (superstars). He played left back for Real and made over five hundred appearances for the club. He broke and still holds the record for most La Liga appearances by a foreigner in a Real Madrid shirt. Carlos collected four La Liga winners’ medals during his time at Real Madrid, 1997, 2001, 2003 and 2007. He also won three European Champions Leagues with Real Madrid, 1998, 2000 and 2002. Carlos came second in the 1997 FIFA World Player of the Year vote and the 2002 BallonD’or voting for best player in the world.

Carlos gained a reputation for scoring wonder goals during his time at Real Madrid, most famously a volley against Tenerife in 1998. Carlos left Real Madrid in 2007 as his contract expired, he scored 67 goals in his 512 appearances. Carlos joined Turkish club Fenerbahce and spent three seasons in Turkey. His time there was mostly unsuccessful as Fenerbahce failed to win the league and Carlos left in 2009 when his contract expired. Carlos played 103 times in Turkey and scored ten goals.

Carlos returned to Brazil to play for Corinthians. However, he left after only one full season as he received threats from fans following a defeat in the Copa Libertadores da América. The club agreed to release Carlos, and he left Corinthians having played just 61 games and scoring five goals. Carlos signed with the Russian club, Anzhi Makhachkala, and received a reported three million euros a year salary. Anzhi were owned by Suleyman Kerimov who spent lavishly to try and make the club a force in Europe. Carlos was named the captain of the club. Carlos received racist abuse during his time in Russia; fans would wave and throw bananas at him when he played.

Carlos retired from football in 2012. He would briefly come out of retirement in 2015 to play two games in the Indian League. Carlos was a key player in the Brazilian team that enjoyed great success between 1997 and 2006. Carlos made his debut in 1992 and made seven appearances that year. He scored his first international goal in 1995. He enjoyed his first taste of international success in 1997 as Brazil won the Copa America. 1997 also saw his most famous goal in a game against France. Carlos struck a free kick from thirty-five meters out that swerved nearly ten meters in its trajectory before finding the net. The goal was the subject of a French science paper.

Carlos played every game of Brazil’s failed 1998 World Cup campaign as they lost to hosts France in the final. Carlos was present as Brazil again won the Copa America in 1999. The crowning glory of his international career came in 2002 in the Japan/Korea World Cup as Brazil swept all before them to secure the country’s fifth World Cup. Carlos received heavy criticism for his role in Brazil’s failed attempt to defend their title in 2006 and retired at the end of the tournament. Carlos played 125 times for his country and scored 11 goals.

Carlos had some short stints as a manager in Russia with Anzhi, Turkey with Sivasspor and AkhisarBelediyespor and in India with Delhi Dynamos. Carlos did not spend more than one season in charge of any club.

During his career, Roberto Carlos won six league titles, four in Spain and two in Brazil. Carlos made the team of the tournament at the 1998 and 2002 World Cups. In 2008 he received the Golden Foot award.

Little is known of Carlos’ own life. Roberto Carlos is the father of eight children, but it is unclear if they are all the product of his relationship with his wife Mariana Luccon who he married in 2009.