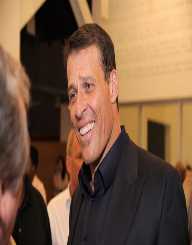 Tony Robbins was born on February 29th, 1960 in Glendora, Los Angeles, United States. He is a renowned author of best-selling help books such as Awaken the Giant Within. He is an American motivational speaker, self-help guru, and a leading author.

Robbins is popularly known for his “firewalk” seminars. His theories and life-coaching skills have received numerous criticisms out there. Nonetheless, he is still a public figure after having coached world leaders including Bill Clinton, George W. Bush, and Mikhail Gorbachev.

When Tony Robbins was a child, he was given the name Anthony J. Mahavorick. He is a Croatian origin. Later in life, he adopted his step-father’s name - ‘Robbins.’ Robbins went to Glendora High School for his early education.

Tony Robbins’ motivation career came as a result of working with celebrity Jim Rohn. Rohn is also a well-known motivation speaker as well as an entrepreneur. With the help of Jim Rohn’s coaching lessons, Robbins was motivated to engage in the life-coaching career. According to Rohn’s teaching, Robbins came to understand that success and happiness in life are achieved after people know how to utilize the resources they currently have.

He began his teaching classes at neuro-linguistic programming (NPL). In 1983, Robbins came across the firewalk after being trained by Tolly Burkan. It is at this point that Robbins began to include it in his seminars.

His career was on a good run after selling his coaching programs through infomercials and books. He gained recognition for being the ideal ‘peak performance coach.’ In 1987, he published his first book called “Unlimited Power.” This book became a bestseller in America.

Nonetheless, it was disputed as its originality was not validated. A few years later, he released his second book Awaken the Giant Within in 1991. This was followed by another book three years then, Giant Steps. In 1995, he wrote and published Notes from a Friend.

By the time 1997 reached, Tony Robbins was already famous. As a result, he began a ‘Leadership Academy,’ which hosted different seminars. This program was a significant success, and he landed a job as a featured speaker. This was sponsored by Learning Annex.

Throughout Robbins’ career, his significant achievement was with “Unleash the Power Within.” This was a four-day seminar. This seminar taught people about the mentality that successful people have. Another major work in his career is “Mastery University.”

In 1994, Tony Robbins had a brain tumor, but fortunately, he recovered from it soon after. Robbins also had an affair with his former girlfriend, Liz Acosta, and the two had a son named Jairek Robbins.