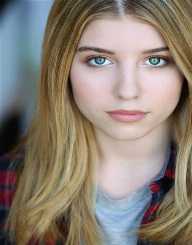 Paris Smith was born on February 1, 2000 in Houston, Texas. United States of America. She is an American actress, singer and dancer. She is seventeen years old. She started acting at a very young age as acting has been her dream for a very long time. She began acting at the age of ten when she appeared in the short film ‘The Presentation.’ She did not give up, and she has appeared in movies, and televisions shows such as ‘Bedtime Stories,’ ‘Totally,’ ‘Puncture’ and ‘Modern Family' among others.

Paris Smith is also a good singer, and she has released three singles titled ‘Crush on Hollywood,’ ‘He Says’ and ‘Game Over’ which she has uploaded on her YouTube Channel. Paris has also been trained as a professional cheerleader. She has also received professional ballet, tap dancing and jazz lessons. She is has so many talents and she explores all of them to the fullest.

Paris Smith made her acting debut at the age of ten in the short film ‘The Presentation.’ Even though her role in the film was minor, her role her made her a bit popular with the general public. At the age of eleven, she co-starred with Chris Evans in her first major movie ‘Puncture.’ She now became more famous and popular as an actress, and so she later appeared in episodes of television shows such as ‘Modern Family’ and ‘My Music.’ She also appeared in other short films such as ‘I Am Not a Hipster,’ ‘Scouted,’ ‘The Bedtime Story’ and ‘Totally.’ She also got a chance to appear in the movie ‘R.A.D.I.C.A.L.S.’ In 2014, she starred in the series ‘React to that’ which pushed her to the next level in her acting career. In the same year, she received her first major role as Maddie in the Nickelodeon sitcom ‘Every Witch Way.’

Paris Smith is charming and beautiful. She is a good actress and a good singer and dancer as well. She loves singing that she has released three singles titled ‘Crush on Hollywood,’ ‘He Says’ and ‘Game Over.’ She is uploading the songs on her YouTube Channel, and they have been viewed and liked by a lot of people. She wanted to become an actress from a young age, and surely she has made her dream come true. She has made it in the acting industry, but she is determined to achieve even more.

She has a supportive family who encourages her to pursue her career with everything she has got. She has appeared in movies with other big stars such as Chris Evans. She has also appeared in an episode of the Nickelodeon sitcom ‘Nicky, Ricky, Dicky and Dawn.’

Paris Smith was born in Houston Texas and was raised there until when she was eleven years old. At eleven her parents moved with her to Los Angeles, California, United States of America so that she can enhance her career in acting. She owns a Mitsubishi, and she loves playing soccer during her free time. She has a very supportive and loving family. She enjoys dancing and spending time with her friends and family. She is a growing actress, and the future looks bright for her.