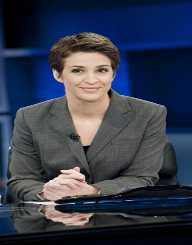 Rachel Maddow is a career-oriented and a dedicated person who loves her life to the core. She has held onto her television show ‘The Rachel Maddow’ on MSNBC since 2008. In 1999 she met with Susan Mikula, an artist. They seem to have good friendship till now. Mikula has shown Maddow the real definition of intimacy in need. She always gives her a shoulder to lean on.

In their mature years, the two are not yet married. Their friendship is one of a kind. Rachel Maddow is a television host and a political commentator. Her night live show discusses different topics such as lively debates, political and stories of the day. The show introduces daily in-depth analysis and endless stories that no other television shows can cover.

Rachel Maddow's childhood life was very active and unpredictable at times. She used to read everything she could hold on to. Afterwards, she would begin to ask questions and analyze her readings. On 1st April 1973, Rachel Maddow was born in California, Castro Valley, United States. Her father; Robert Maddow has formed the United States Air Force Captain. Her mother Elaine is a school program administrator.

Maddow has one brother, David Maddow. She comes from a mixed ancestry, and she spent her childhood days in an orthodox Catholic community. She attended Castro Valley High School in California. She participated in various sports in basketball, volleyball, and swimming, until she was forced to quit due to a shoulder injury.

In 1994, at the age of 21, Maddow volunteered at a nearby local AIDS clinic. The same year, Maddow joined Stanford University and graduated with a public policy degree. In 1995, Maddow received a Rhodes scholarship and entered the Lincoln College. In 2001, she earned her Doctor of Philosophy in politics from the Oxford University.

Being an active life lover, Rachel Maddow won a WRNX radio station contest. She landed a co-hosting job and was able to host uncountable guests. Afterwards, ‘The Rachel Maddow Show’ was aired. The high stance of this show led her to launch a television show with a similar name on MSNBC. She is ultimately a courageous and bold woman.

For Rachel Maddow to accept her sexuality on the public platform isn’t a walk in the park stratagem. She was also aired in CNN’S live show such as ‘Paula Zahn Now.' In 2008, Maddow was chosen as a substitute host for ‘Countdown with Keith Olbermann. Her creative work was loved by an audience of all ages which made her host the show several times.

Olbermann encouraged Rachel to host her show which fully premiered in August 2008 in MSCBC’S 9 p.m. It then became the big noted show of all times. After her first month of the show's ownership, the viewership tripled as more people were fascinated.

Rachel Maddow received an Emmy Award in the Outstanding News Discussion and Analysis category. In 2009 she earned the Grace Award that was presented by the American Women in Radio and Television. In 2010, Rachel received the Maggie Award for the murder of Dr. George Tiller coverage. In 2010, she garnered the Walter Cronkite Faith and Freedom Award for ‘The Assassination of Dr. Tiller’ documentary.

Rachel Maddow now lives in Western Massachusetts and Manhattan with her partner Susan Mikula. Their first date was at National Rifle Appreciation NRA. Besides, her natural image is entirely undefinable; even the public finds it hard to identify her at times. When not at work, she loves to spend her time fishing and reading.

Above all Rachel Maddow was the first openly gay American to receive the Rhodes scholarship. As stated by various sources, Maddow has been suffering from clinical depression. But this won’t stop her to achieve her dreams.