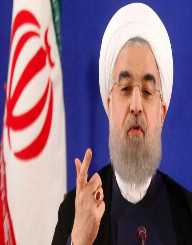 Hassan Fereydoun Rouhani was born on November 12, 1948, in Sorkheh, Semnan province, Iran. His father owned a spice shop and was politically active against Mohammad Rea Shah Pahlavi, the Shah of Iran. He was arrested multiple times before the Iranian Revolution in 1979.

Rouhani began his studies in 1960, attending the Semnan Seminary. The following year he moved to the Qom Seminary. Besides his religious studies. Rouhani also studied modern courses and got admitted to the University of Tehran in 1969. He got a B.A. degree in Judicial Law in 1972. The following year he entered military service in the city of Nishapur. He continued his academic studies at Glasgow Caledonian University in Scotland, graduating with M.Phil. Degree in Law in 1995. His thesis was entitled ‘‘The Islamic legislative power with reference to the Iranian experience”. He also received a Ph.D. degree in Constitutional Law in 1999.

Hassan Rouhani began his political activities by joining the Iranian Islamist movement. In 1965 he began to travel the country and give speeches against the government of Mohammad Reza Shah Pahlavi. He was arrested several times and eventually banned from live performances. Rouhani was under surveillance by Iran’s pre-revolutionary intelligence agency and was advised to leave the country. Rouhani fled to France, where he became to make public speeches to Iranian students living abroad.

After the 1979 Iranian Revolution, Rouhani became engaged in the revolutionary struggles. His work was dedicated to stabilize the Islamic Republic and to do so; he started organizing the disorderly Iranian army and military bases. In 1980, Rouhani was elected to the Parliament of Iran. He served in various capacities for a total period of 20 years. He was the deputy speaker of the Majlis and the head of the defense committee. Rouhani was also the leader of the supervisory council of the Islamic Republic of Iran Broadcasting from 1980 until 1983.

During the Iran-Iraq war, Rouhani was a member of the Supreme Defense Council and High Council for Supporting War, amongst other high-ranked positions. He was one of the three people who talked to the U.S. national security adviser Robert C. McFarlane about buying weapons, during his visit to Tehran in 1989. This later became known as the Iran-Contra affair. When the war ended, Rouhani was awarded the second-grade Victory medal.

In 1989, Rouhani turned down the post of the Minister of Intelligence of Iran. When the Constitution of the Islamic Republic of Iran was amended, Rouhani became the first secretary of the Supreme National Security Council. He kept the post until 2005. During this time he was also the national security advisor for two Iranian presidents.

Rouhani was elected to the Assembly of Experts in 2000 and became the head of the political and social committee of the assembly. Besides his executive posts, Rouhani was also academically active. He was a member of the board of trustees of Tehran University from 1995 until 1999. He is also the managing editor of three academic and research quarterlies.

Rouhani’s extensive experience and prominent positions made him the leading candidate for the 2013 presidential election. Rouhani announced his candidacy on March 11, 2013. In June, it was announced that Rouhani might be disqualified from the race and it was suggested that he would not be allowed to win. In the election, Rouhani won by earning 18,613,329 votes against 6,077,292 votes of his main opponent Mohammad BagherGhalibaf. His victory was widely seen as the result of Green movement.

His presidency plans included the long-term economic development of Iran by increasing power purchase of the public, improving the business environment and reducing the wealth gap. Rouhani also supports the increase of internet access but has criticized the media for reporting on the trivial foreign news instead of focusing on the national matters. He is not publicly addressing human rights issues and states that he has limited power on the matter. However, Rouhani is a supporter of women’s rights.

When Hassan  Rouhani was 20 years old, he married his cousin Sahebeh Arabi, who was at the time 14 years old. The couple has five children. One of his sons died for unknown reasons, but it was suggested that he committed suicide to protest his father’s connection with the Supreme Leader Ali Khamenei.