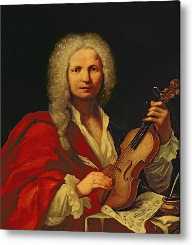 Antonio Vivaldi was born on March 4th, 1678. He was born in Venice, Italy. Although the famous music composer had been ordained to become a priest, he left this and concentrated on the music career. Throughout his music career, he composed hundreds of songs. In addition to this, the renowned composer is to be remembered for his expertise in opera, e.g., Bajazet and Argippo.

Antonio Vivaldi took his music career after inspiration from his father when he was still a toddler. Giovanni Battista Vivaldi, his father, was an expert in playing a violin and he made sure that his son followed his footsteps. His father also made a point of ensuring that young and talented Vivaldi got the chance of meeting with Italy’s most beautiful musicians of that time.

Through his religious background, Vivaldi initiated his theological training, and by the time he was 15 years old, he was ready to become a priest. In 1703, he was ordained to the priesthood. The young priest had red hair which made him be nicknamed as “Il Prete Rosso” which meant, “the red priest.” Shortly after, Vivaldi had specific health issues that deterred him from performing his priestly duties well. As a result, he left his role as a priest.

During Antonio Vivaldi’s mid-twenties he was a violin expert to the extent that he had been named violin’s master in Ospedaledella Pietà in Venice. For the next three decades, he remained in Ospedale which was an institution for orphans. While Vivaldi was the leader of this system, orchestra gained global recognition. Later in 1716, Vivaldi was promoted to be the music director.

His works in opera came about during this time. For example, some of his significant works in opera that were composed during this time were Farnace and La Constanza trionfante. Vivaldi’s works were most appreciated by the elite people in the society. The royal families of Europe formed a particular part of his fan base. One of the cantatas that he did, Gloria e Imeneo, was explicitly dedicated to King Louis XV during his wedding. Emperor Charles VI also appreciated his works, and at one point he named him a knight.

In spite of the fame that Antonio Vivaldi had amassed over the years, his later life was not good. This is because his music faded away quickly as a result of the ever-changing music environment he was exposed to. Moreover, younger composers were coming up and dominating the industry. Soon, Vivaldi left Venice and was headed to Austria. In his mind, he thought that he would gain a good position at the courts situated there. He lacked a famous patron since Charles VI died during this time.

On July 28th, 1741, Antonio Vivaldi died a poor man. Later on, in the 20th century, his major works were revived by scholars and musicians. In 1939, Alfredo Casella organized for a revival of Antonio Vivaldi’s music. His music has gained recognition through global performances since World War II.