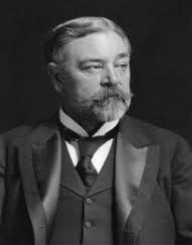 Robert Todd Lincoln was the eldest son of US President Abraham Lincoln who made a name for himself as a reputable lawyer. He also did his share in government service by serving as Secretary of War and a US delegate to Great Britain.

Born as the first-born son of Abraham and Mary Todd Lincoln on August 1, 1843, at Springfield, Illinois, Robert Todd Lincoln was named after his grandfather from his mother's side.

He was also their only son who grew up to live through adulthood since his three other brothers named Edward, William and Thomas passed on due to succumbing to illness in their younger years.

With a father duly devoted to his work on politics, Robert Todd Lincoln did not have many fond memories of his father. Abraham Lincoln was elected president in 1861 while the younger Lincoln was attending his schooling at New Hampshire, therefore decreasing their time spent together.

He attended Phillips Exeter Academy in preparation for college since his initial admission to Harvard did not push through for failing fifteen out of sixteen subjects at the exams. He graduated from Exeter in 1860 and proceeded to enroll again at Harvard College in the same year which he passed.

In 1864, Robert Todd Lincoln graduated from Harvard and proceeded to attend the prestigious Harvard Law School. However, his education was put on hold due to rendering service at the military.

His mother was against his enlistment since two of his brothers already died, but she eventually relented due to his father's insistence. He served a little too late during the Civil War which was much criticized by the public and rendered tenure under General Ulysses S. Grant's army as captain

On April 15, 1865, Robert Todd Lincoln suffered the death of his father by assassination from John Wikes. From there, Lincoln decided to live with his mother and brother in Chicago for two years as a means of supporting her mother's already declining mental health.

While in Chicago, he continued his education for attaining a law degree at the Old University of Chicago which he fulfilled. He graduated and passed the bar examinations on February 25, 1867, subsequent from his moving out from living with his family.

Lincoln's Career as a Lawyer and Government Official

After passing the bar, Robert Todd Lincoln set up his practice as a lawyer by opening his law firm where the majority of his clients were involved in the business of railroads and also in the corporate sector. In addition to that, Lincoln was also a part of the Chicago Bar Association as a charter member.

Like his father, Lincoln also did service for his country though not on a grander scale. Lincoln did service for three different presidents in his life. He was called to the world of politics the first time as assistant secretary of state at then-president Rutherford B. Hayes in 1877. He rejected Hayes' offer, but he did act as the representative in an 1880 Republican Convention.

When James Garfield was elected as president, he asked Robert Todd Lincoln to be his secretary of war of which he obliged and served from 1881 to 1885. The last president he served before returning to his law practice was to President Benjamin Harrison who appointed him as the ambassador to Great Britain in 1889 until 1893.

When Lincoln's only surviving brother Thomas or Tad, as he was fondly called, suddenly died at the age of 18, his distraught mother turned for the worst.

Robert Todd Lincoln was already concerned for her welfare, so he decided to admit his mother to Bellevue Palace, a sanatorium located in Fox River Valley.  Although his mother's initial trial deemed her insane, to avoid the damaging criticism of the public the Bellevue director declared her sane. She was released and lived with her sister however this event resulted in an estranged relationship between the two who never reconciled fully.

Robert Todd Lincoln was married to Mary Eunice Harlan in 1868, and they had three children named  Mary Todd, Abraham II, and Jessie Harlan. Lincoln's only son Abraham or "Jack" died at from a wound infection at the age of 16.

He died peacefully in his sleep at his Vermont summer home on June 26, 1926, at the age of 82. The cause of his death was declared as cerebral hemorrhage due to arteriosclerosis.