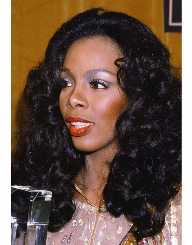 LaDonna Adrian Gaines was born on 31st December 1948, to Andrew and Mary Gaines. She was born in Boston, Massachusetts, in the United States. She was born into a modest family, with six siblings. Her father was a butcher, her mother, a schoolteacher. Summer studied at Jeremiah E. Burke High School, and she participated in school musicals. It was only weeks before graduation when Summer decided to leave school, and she moved to New York.

When Summer moved to New York in 1967, she joined a blues rock band called Black Crow. The group failed to get a recording contract because the record label was only interested in Summer, so the group dissolved. Summer stayed in New York and won a role in the musical, Hair. From there, she went to Germany to perform in the Munich version of the show. Summer moved to Munich, and after Hair, performed in other musicals like Godspell and Show Boat. Summer’s first single was released in 1968. It was the German version of “Aquarius” from the Hair musical. Her second single was released in 1971. Three years later, she moved to Vienna, Austria, and joined the Vienna Volksoper.

In 1974, Summer signed a contract with Oasis label in Munich. It was run by producers Giorgio Moroder and Pete Bellotte. Her demo tape led to a distribution deal with Groovy Records. Summer record at the time was mistakenly released under the name of Donna Summer rather than Donna Sommer, and the name stayed. Her first album, Lady of the Night, was a great hit in Sweden, Germany, the Netherlands, and Belgium.

In 1975, Summer approached Moroder with a song idea she had. They wrote the song and sent the demo to Neil Bogart, president of Casablanca Records. The song proved extremely popular when he had it played at one of his famous parties. He asked for a longer version to be written, which Moroder and Summer did. The song was Love to Love You Baby, and due to the reception the demo received, Summer was signed to Casablanca Records.

In early 1976, the song reached number two on the U.S. Billboard Hot 100 chart. Casablanca Records quickly released Summer’s first album and then followed shortly after with the release of her second album. Her next single, I Feel Love, went to number six in the U.S., and number one in the UK. Summer began working on her next album, Bad Girls, with Moroder and Bellotte. The album went triple platinum when it was released. The songs Hot Stuff and Bad Girls both went to number one in the charts.

In 1979, her albums On the Radio: Greatest Hits Volumes I & II were released. In 1980, Summer wanted to move in a different direction with her music, but Casablanca wanted her to continue with the disco. Tensions eventually let to Summer parting ways with the record label.

Her next album, The Wanderer, had several different types of music on it, and although her new label rushed it out to market, the album went gold, and the title song went number three. Summer’s next album was not approved by David Geffen, the owner of her new record label, Geffen Records. The project didn’t go ahead at the time.

During this period, Polygram Records took over the ownership of Casablanca Records. Her new record label was advised by Polygram that her contractual arrangements stipulated that one more album had to be done under their label. Summer’s album was called She Works Hard for the Money. The album was released in 1983, and the title song went on to become a huge hit for them.

Her next album was not as successful, and she failed to have a top ten hit from it. Over the next few years, Summer’s star began to wane. She didn’t have any more major album or single successes. By the mid-1980s, Summer had become a born-again Christian. She made some disparaging remarks about gays at the time, which caused a huge controversy and damaged her career.S summer parted ways with Geffen Records in 1988. Before they parted ways, Summer had recorded another album, Another Place and Time, which Geffen decided not to release. In 1989, the album was released by Warner Bros. Records in Europe.

She had two top ten hits from the album and a third that hit the top 20. Warner Bros.’ sister label, Atlantic Records, signed a contract with Summer in the U.S. The first single from the album, This Time I Know It’s for Real, went to number seven in the charts.

Summer was also an artist, who painted over the years. During this period, her paintings were starting to be shown in galleries. Summer continued to record and release her music, and she was signed by Mercury/Polygram. She continued to have success.

In the same year, 1994, Summer was cast in the role of Aunt Oona in the television sitcom Family Matters, which she appeared in on several occasions until 1997.S summer's music was also finding great success on the dance charts during the same period.

Summer released her autobiography in 2003, called, Ordinary Girl: The Journey.

In August 2010, she released a new single, To Paris With Love, which went to number on the U.S. Billboard Dance Chart.

Summer undertook 13 concert tours between 1977 and 2008 in support of her album releases. She released 17 studio albums, two live albums, and a huge 89 singles. On 17th May 2012, Summer died from lung cancer.

Summer received many awards and honors, including five Grammy Awards from 17 nominations, and six American Music Awards from 12 nominations.S he was inducted into the Rock & Roll Hall of Fame in 2013.

In 1973, Summer married Helmuth Sommer, an Austrian actor. The couple had a daughter together, but they divorced in 1976.

In 1980, she married Bruce Sudano, a singer. They had two daughters together, and they were still together at the time of Summer death in 2012.