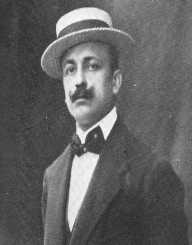 Filippo Emilio Marinetti was an Italian novelist, poet, dramatist, and political critic. He founded an art ideology called The Futurism.

Filippo Emilio Marinetti was born in Alexandria, Egypt on December 22, 1876. He was the son of Enrico Marinetti and Amalia Grolli. He grew up in Alexandria in a scholarly environment. His father was a practicing lawyer, while his maternal grandfather was a university professor. Though not formally married, his parents stayed in a cohabiting union.

They came to Egypt before he was born. In 1865, Khedive Ismail Pasha invited Enrico and Amalia to Egypt. They became the Khedive’s legal advisors in foreign investment companies. Marinetti was born eleven years after his parents arrived in Alexandria, then the capital of Egypt.

In 1908 he joined other young literary minds in France to join an art society. In 1909 Marinetti published his Futurist Manifesto. In his theory, Marinetti explained the correlation of art, speed and violence in the society we live in. He even explored the political aspect of it. He explained that anarchy was essential to the well-balanced society. Marinetti believed that controlled violence was the best option for society. Fascism provided the ideal balance of violence. As such, Marinetti became a close associate of the future Italian leader Benito Mussolini. On February 20, 1909, Marinetti published the Founding and Manifesto of Futurism on the French newspaper Le Figaro.

As intellectuals debated on his new theory in Europe, Marinetti prepared to launch his first literary production. In April 1909 Marinetti staged his first public drama production in France. The play The Feasting King, originally written in 1905 was interrupted by the audience. In the process, Marinetti engaged with his audience. When one of the revelers went overboard, Marinetti decided to have a fist fight with him. He staged his second play in the city of Turin in Italy. The audience did not connect with his futuristic displays. Marinetti staged his characters in alien costumes. Like the first one, Marinetti was not well received. About ten years later, novelist Josef Capek used the term robot to describe Marinetti’s costumes.

In 1910 he published the Manifesto Against Past-Loving Venice. In this publication, Marinetti suggested a major transformation of the city of Venice. He claimed that Venice would be better off without the canals. He suggested that the canals be filled with the rubble of debris from the old dilapidated castles and palaces. This would create space for the building of industries. Marinetti believed Venice would be better with an expanded working population.

In 1911 Italy went to war with Turkey. Marinetti was hired and posted to Libya by a French daily journal. Libya was then an Italian colony. He later collected his war journals into one publication. He called the publication The Battle of Tripoli. After the war, he spent his time visiting England. He believed London to be the epitome of his futuristic ideology.

In 1912 he changed his approach to his futuristic ideology. He started compiling verses and poems to emphasize his point. He first produced the Pope’s Aeroplane. In the production, Marinetti explored the anti-Catholic sentiments in society. He also incorporated the anti-Austrian sentiments in the western world. He did several other poems in his active literary career.

Marinetti was a Fascist. He was among the early members of the party when it was formed. He continued working for the growth of the party during the WW2 up until the fall of Benito Mussolini.

At one time, He implored Mussolini to make his futuristic art theory the national Italian art heritage. Mussolini was not an art lover, thus he declined.

Marinetti married Benedetta Cappa in 1926. Benedetta was an established painter. Prior to her marriage, she lived in Rome and had several art exhibitions on her own. She was one of the earliest converts to Marinetti’s futuristic art principle. The couple had three daughters namely, Vittoria, Ala, and Luce.

Marinetti was brought up in a Catholic family. He later ascribed his spiritual affiliation to atheism.

Filippo Marinetti died of heart complications on December 2, 1944. He was buried next to his wife in Milan. At the time of his death, Marinetti was living in Bellagio, Italy.